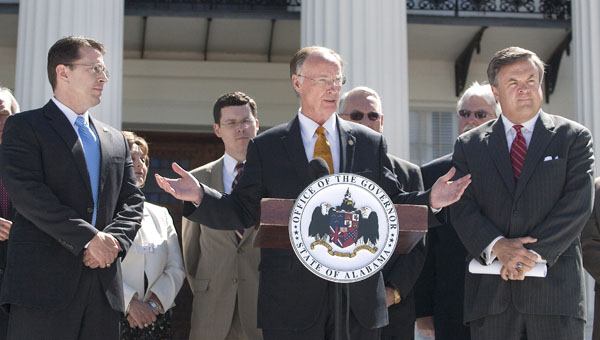 At a press conference on the Capitol steps, Bentley said the Jobs Creation and Retention Act provides a new incentive to promote the creation, expansion and retention of jobs in Alabama.

The Jobs Creation and Retention Act would allow an approved company to retain a percentage of state income taxes withheld from new full-time employees to recover the company’s capital investment.

“The Jobs Creation and Retention Act is another incentives option we can use to give greater flexibility to bring companies and keep companies in the State,” Bentley said at the press conference. “My mission is to bring jobs to this State and this bill gives us one more option in our economic development toolbox to get Alabamians back to work.”

Qualified companies would be approved for the tax retention by the State Industrial Development Authority upon the written recommendations from the governor, Alabama Development Office and the Alabama Department of Revenue. Once approved by SIDA, the company would enter into a project agreement with the State that sets forth the amount of withholding incentives, the period for which the incentives can be retained by the company, the number of full-time employees at the company, and terminations provisions in the event that a company fails to meet minimum job and/or capital investment requirements.

“I believe this incentive is the key to unlocking Alabama’s economic development potential. It will be used strategically and judiciously to attract and secure good paying jobs,” said ADO Director Seth Hammett.