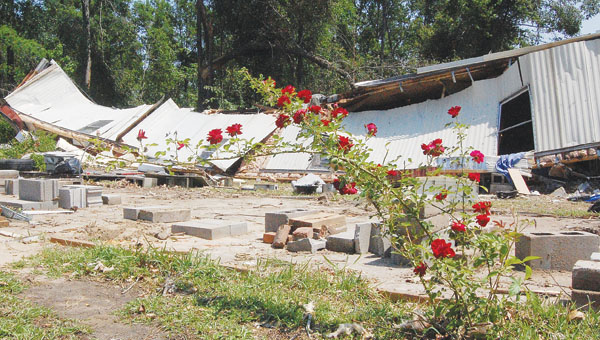 Edna King Hodoh still hasn’t gotten over what happened late Friday night when a storm swept through the Damascus community, damaging her home and destroying others in the neighborhood, including her sister’s trailer.

No one was injured in the storm, which the National Weather Service said was likely a tornado.

“We were blessed,” Hodoh said.

Two mobile homes in Damascus were completely destroyed, while several other mobile homes and brick houses sustained some amount of damage.

The line of storms passed through just before midnight Friday, and the National Weather Service in Mobile said the storm that hit the Damascus area was probably a tornado. With all the storms in Mississippi and Alabama, the service does not have enough manpower to have checked all possible tornadoes yet.

Hodoh and her husband were at home in their mobile home when the storm hit.

“All of a sudden there was a whoosh and everything started to fly all over the place,” Hodoh said. “It was a strange sound, and it’s hard to explain. I was in the den when, all of a sudden, a tree flew into the bedroom wall.”

A big hole in the mobile home where the tree came through has been temporarily covered with duct tape. The railing at the front door steps was torn away and the sliding glass doors were broken.

The car had been parked beside the mobile home, she said. Now that same car has been moved some 30 or 40 feet and left sitting on all four tires. It looks as if someone could get in it and drive away, although Hodoh said she hadn’t tried to drive it yet. The only visible damage is the broken back window.

The home of Marrinetta Williams, Hodoh’s sister, was totally demolished — blown off its foundation and left lying upside down, with the roof blown into a field behind.

Only the steps leading to the front door and a rose bush beside the house were unscathed.

The four people in the mobile home at the time of the storm were not hurt, and Hodoh said there was a 5-year-old who crawled out from under the rubbish after the storm was over.

“I don’t know how they got out alive,” Hodoh said. “I don’t know how any of us didn’t die. It hurt me yesterday when I looked at all the damage and I just cried ‘Oh, my God.’ None of us got a scratch on us and all this destruction.”

Red Cross and Southern Pine workers have visited the families, and Escambia County Highway Department workers were on the scene continuing to clear trees Monday morning.

Hodoh said she is the only one with a working phone.

“The way the weather has been for the last couple of years, if you don’t believe in God, you better start believing,” he said.

Down the street from Hodoh’s house, another mobile home’s walls and roof were peeled away, the furniture scattered and even the carpet pulled up. A bathtub was torn from the pipes and standing on one end.

The damaged houses are surrounded by twisted trees torn from the ground, scattered limbs and metal roofing wrapped around brush.