A Brewton man has been charged with aggravating stalking after a McDavid, Fla., woman told police he had sent her threatening text messages. 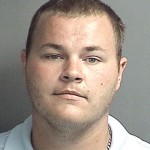 According to an incident report from Escambia County (Fla.) Sheriff’s Deputy Michael Wayne Vinson, the woman told police on March 28 that she had been receiving threatening text messages from Black.

The suspect also sent text messages detailing her locations and clothing and drove by her house throughout the day, the sheriff’s report states.

At one time, the report states, Black even pulled into her back yard and came to the door. After the woman met him with a pistol, he left, but he continued to send text messages to her.

The woman told deputies she was afraid of Black and believed that he might be capable of his threats.

Warrants were issued and Black was arrested and taken to the Escambia County, Fla. Jail in Pensacola, Fla. He appeared in court and was released on $12,500 bond.

Judge Thomas Santurri of the First Judicial Circuit Court of Escambia County, Fla., also ordered him to have no contact with the woman and issued a 500 feet exclusion zone from her home.