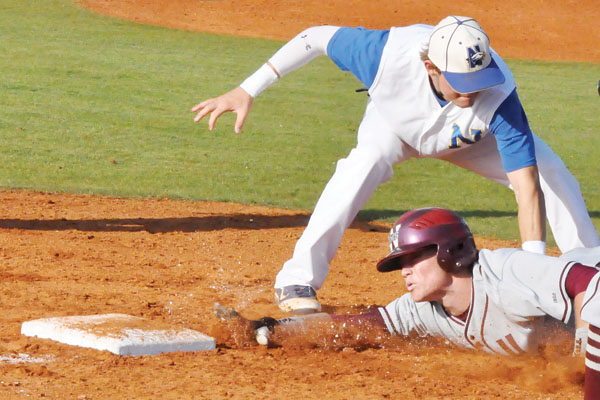 In the first round of the AHSAA class 4A state playoffs, the No. 4 W.S. Neal Eagles and the defending 4A state champions UMS-Wright split to force a deciding third game today at noon in East Brewton.

W.S. Neal won game one 14-6 to take a 1-0 lead in the best-of-three series, but UMS-Wright countered in the game two nightcap to win 5-3 to earn the split and force the extra game.

“In game one, we fell behind 4-1 and we came back to go up 8-4 kind of like we have been doing all year,” W.S. Neal head coach Coy Campbell said. “We swung the bats really well in game one. In game two, we saw their best (pitcher). We had an early lead and they just got hits when they had men on base. We didn’t beat ourselves or anything like that, I just thought it was a good baseball game.

“We will throw another sophomore out there tomorrow and we will see what happens.”

Campbell said his team just has to do the same thing they did Friday night in game three.

“I know we didn’t win both games today, but I just feel like if we play like we did today, we will win tomorrow,” Campbell said. “Hopefully that will be the case.”

The winner of the game today will win the series and advance to round two against Saraland, who defeated Thomasville Friday night.

With a W.S. Neal win, the Eagles will host round two next Friday. With the split Friday, W.S. Neal’s overall record is now 21-7.

Trailing 4-1 after the top of the second inning, W.S. Neal scored seven runs to take an 8-4 lead and added four more in the sixth to win game one by eight, 14-6.

Jeremy Myers pitched the seventh inning and allowed one hit, one walk and struck out one.

For the Eagles at the plate, Hunter Mullins was 2-for-3 with a double and four RBIs and Reid Johnson was 1-for-3 with two RBIs.

Christian Purvis was 3-for-4 for the Eagles with two doubles and two RBIs.

UMS-Wright left 11 runners on base and made four errors in the loss while W.S. Neal left six runners on and committed four errors.

In game two, UMS-Wright turned a 3-2 deficit into a 5-3 lead after scoring three runs in the fifth and held W.S. Neal late in the game to get the two-run win and force a third game.

The Eagles scored all their runs in the third inning to take an early 3-0 lead, but UMS-Wright plated two in the bottom of the inning to cut the lead to one.

After the Bulldogs took the lead in the fifth with three runs, they held on for the win in the seventh after W.S. Neal had runners at first and second with two outs.

W.S. Neal left seven runners on base and made four errors while UMS left four on and made two.

The Eagles had only five hits in the game loss with Mullins going 1-for-4 and Williamson going 1-for-3. Godwin was 2-for-3 and Purvis was 1-for-3. Johnson had one RBI in the loss.

WSN baseball splits in round one Friday; Game three…