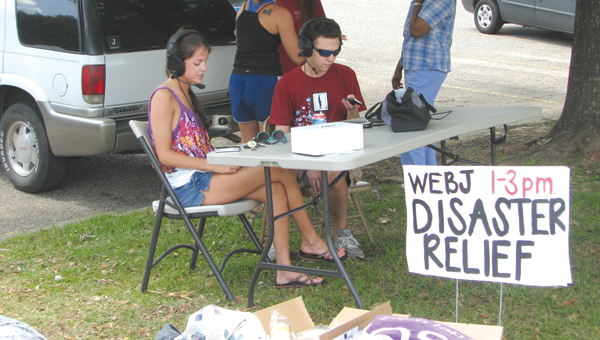 A group of teenagers sparked a weekend of donations in the parking lot of Piggly Wiggly on Douglas Avenue that spilled over into Monday as they worked to offer assistance to the victims of storms that ripped through Tuscaloosa April 27.

Rachel Fraser helped organize the collection effort with Kelsey Green and Chelsea Raymon that has collected several boxes of items to be distributed to those in need.

Fraser, who was a victim of the storm in Tuscaloosa herself, said she knows there are plenty there who need help.

“I’ve got friends who are still there that are in need,” Fraser said Monday. “I’m so blessed and so lucky to have been spared. When I was able to get home, I knew I couldn’t treat this as a vacation. I had to do something to help those that were left there.”

The group’s effort was one of several throughout the community to try to help raise money or collect goods for Alabama residents affected by the storms.

The trio had been publicizing the event as best they could around the area through local media outlets and social networking Web sites.

Spinks Megginson brought equipment to the “donation station” Monday afternoon to bring more attention to their efforts through a live broadcast on local radio station WEBJ.

“I really wanted to do something to help,” Megginson said. “I have finals this week myself, so my time was limited in what I could do. This was just a good way for me to help in a way that I could.”

Fraser said the group had gathered Friday morning and began their plea for donations of supplies, clothes, food and money to aid victims of the storm.

“We have collected all sorts of things from clothes and shoes to baby bottles,” Fraser said. “We’ve collected a good bit of cash as well. Some of that we will pass along to the Red Cross to use as they see fit. We will also be using some of the cash to purchase things like underwear, T-shirts and socks for those we know are in need. There are so many people left in Tuscaloosa that have nothing.”

Carl McInnish, youth director at Brewton’s First Presbyterian Church, is helping the cause by delivering needed items to the area hardest hit in last week’s storms.

“I’ve got the church van loaded with supplies, tarps and clothes to take there,” McInnish said Monday afternoon. “I’ll stay in Northport until Thursday working with my chainsaw where I can.

McInnish, who has already made one trip to the devastated area surrounding Tuscaloosa, said the need is great and the support and contributions from Brewton area residents and businesses has been a blessing.

“We have been blessed with donations,” McInnish said. “We’ve got items like work gloves, pants and other things that were donated. I’ve gotten calls from the Re-Store, Marvin’s and Bondurant’s for things that will be needed.”

McInnish said he is making the trip alone this week, but won’t be working alone when he arrives.

“I’ll meet up with a group from Dothan Wednesday who will be bringing up some generators,” McInnish said. “It’s a Church of Christ Disaster Relief Team and we’ll be doing some chainsaw work around the area. The body of Christ works well when we work together.”

There are still several groups, churches and organizations working to gather needed supplies and materials needed by Alabama residents in many of the areas ravaged by last week’s storms.

As of Monday afternoon, nearly half of Alabama’s 67 counties had been placed on the disaster declaration list. Three additional counties were added Monday, bringing the total affected to 31. The death toll was at more than 230 in Alabama alone.

The area of disaster grows as crews assess damages across the state calling for more supplies needed by those affected.

A concert planned at First Baptist Church of Brewton will now have an added benefit for those in central Alabama with the event acting as a collection period for needed supplies.

“Due to the recent storms which ravaged the state of Alabama, event organizers have announced plans for the event to benefit the victims of the deadly tornadoes,” Deana Warren, publicist for the event said.

As news of the devastation began to circulate, popular singer, songwriter, author and talk show host, Janet Paschal reached out to friends in Alabama to see what could be done to assist those in need.

“One of the first phone calls we made was to Comfort Care Home Health & Comfort Care Hospice,” Paschal said. “Throughout the past year and a half we have been blessed to present several events with Comfort Care and the first thing we wanted to do was to make sure all those folks were OK.”

According to Warren, Paschal and Parker, along with Comfort Care Hospice and the First Baptist Church of Brewton, are inviting those attending this special concert on Friday night to bring items which can be placed in comfort care packets and distributed to the areas directly impacted by the storms.

The event is being sponsored by Comfort Care Hospice of Brewton, in partnership with BankTrust, DW McMillan Hospital, Westgate Village and Williams Memorial Chapel Funeral Home and will begin at 7 p.m.