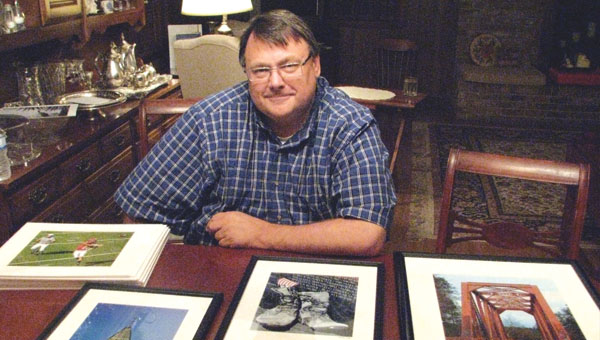 A new artist will be bringing his work to the “Evening of Art” on Friday night to help kick off the Alabama Blueberry Festival weekend.

Bert Campbell, a graduate of T.R. Miller High School who has lived most of his life in Brewton, brings his new love of photography to the art show, showing for the first time anywhere.

“I never thought much about becoming a photographer,” Campbell said. “I liked to take snapshots of my children and other family members, but that was as far as it went.

“I really got started when I was living in Alexandria, La. Circuit City went out of business and was running a really good sale. I thought I would pick up a new camera because the prices were so low. The one I got was half price.”

Campbell said he lucked out by having a next-door neighbor who knew a lot about photography and was always there to answer questions.

“I still call him today with any questions that I have,” Campbell said.

He has a good eye for composition and color, and it shows in his photographs. He said that technology has made photography come a long way.

“When you use film you waste a lot of film on the photos that don’t turn out,” he said. “You also have to wait to see what you have until they are developed. With digital photography, you can see right away if you have a good one. If you are shooting sports or some fast-moving action, you might not have time to check but you don’t waste a lot of film. I probably throw out 300 shots for every one that I keep. If I was using film, that could get very expensive. I love to color enhance and work with the computer to make them even better.”

Campbell has a really good selection of photographs. He works in Monroeville and makes the drive every day. He said he finds many of his subjects along his drive and that he has his favorites.

“I don’t like to do portraits,” he said. “ I really like taking photos of sports and everywhere I go, I take the camera.”

Campbell will bring some of those photographs to the “Evening of Art” at the Hourglass. Everything from photos taken at Auburn University, polo matches at Fairhope, Blue Angels flying in formation, to old barns, farmhouses, and cotton patches. He has a great photograph of Bull Slough Bridge in Conecuh County, and be sure to see the photograph he took at the Vietnam War Memorial.

“Anybody would think it had been staged,” Campbell said. “But I found it just the way I photographed it, a pair of old army boots, worn and discolored, with an American flag tucked into one of the boots.”

Campbell said he has admired lots of photographers, but one that he remembers being around a lot was the late Frank Luttrell.

“His son, Alex, and I have always been the best of friends and I grew up seeing Mr. Frank take some really great photos. I think I learned a lot from him.”

The ‘Evening of Art’ will be held at The Hourglass from 5 to 7 p.m. and tickets will be $35 each. Tickets are available at the door, at the Chamber office or at the following sponsors, Bank of Brewton, BankTrust, BB&T, Brewton Mill Federal Credit Union, First Exchange Bank, First Progressive Bank and Gulf Winds Federal Credit Union.

Twenty-five dollars out of the cost of a ticket will be exchanged for ‘funny money’ and that may be spent on artwork on display Friday night or at the arts and crafts booths at the Festival on Saturday, excluding the food court. Artists will redeem the funny money through the Chamber. Artists are charged a $25 fee, which will be deducted from their booth fee if they participate at the Festival the next day.

Nita Trammel with ‘What’s Cooking Catering’ out of Uriah will cater the ‘Evening of Art‘ with refreshments and hors d’oeuvres. There will also be door prizes.

Those who attend the “Evening of Art” at the Hourglass will get a big treat when they see Bert Campbell and the other artists that will have their work on display on Friday night.