The 2011 Brewton Cal Ripken 10- and under softball saw their first journey to the Southeast Regionals in Tennessee come to an end Saturday.
In their first game Thursday, Brewton lost 16-11 to Lands Runs of South Carolina.
In their second game of the tournament Friday, Brewton began play at 9 a.m. against Warren County of Tennessee and won 15-3 to improve to 1-1 in the tournament.
Friday night, in their second game of the day against Leesburg of Virginia, Brewton lost 4-1. The loss dropped Brewton to 1-2 in the tournament.
Needing a win and some help from another team in their final pool game Saturday against Ponte Vedra of Florida to advance to the single elimination tournament on Sunday, Brewton failed to get either option as they ended the tournament with a 20-4 loss to finish the tournament and their season with a 1-3 record.
The regional tournament showed 10 total teams with two pools of five.
Brewton was in the American Division pool with Lands Run, Leesburg, Ponte Vedra and Warren County.
The National Division pool featured Union East of North Carolina, Glen Allen of Virginia, Pitt County of North Carolina, Oviedo of Florida and host team Marshall County of Tennessee.
Originally the tournament had 11 teams with West Ashley of South Carolina being the other team.
The top two teams of each pool advance to the single elimination tournament with the winners playing for the championship.
The regional tournament was the final round of all stars as there is no World Series for the 10U group.
Making the 2011 10-and-under team for Brewton this year was: Hayley Thompson, Steely Ruzic, Alexis King, Anna Grace White, Myra Reiss, Mary Madison Brown, Hannah Lisenby, Mallori Floyd, Morgan Longmire, Gabbi Solomon, and Kennedy Harp.
Coaches for the team were Will Ruzic, Terry Reiss, Greg White and Robbie Floyd.
While the tournament run for the Brewton 9-10 team is over, both Brewton and East Brewton will send their teams to the 11-12 World Series tournament in Andalusia.
The tournament is set to begin Thursday, August 4.

Game 1: Lands Run 16, Brewton 11
Leading 11-9 after the top of the fifth inning, Brewton gave up six runs in the bottom of the inning as they lost 16-11 to Lands Run in their first game of the regional tournament in Tennessee Thursday.
South Carolina led Brewton 3-0 after the first inning and 5-1 after two innings before Brewton scored eight in the third inning to take a 9-5 lead.
South Carolina would later score one run in the third to cut the lead to 9-6 and three in the fourth to tie the game at 9-9 heading into the fifth.
Brewton broke the tie with two runs in the top of the inning but fell to seven unanswered runs to lose by five.
Steely Ruzic pitched three innings and struck out three, walked six and allowed five hits. Myra Reiss pitched three innings and struck out four, walked one and allowed five hits.
Brewton made five errors in the loss.
At the plate, Morgan Longmire was 1-for-2 with two runs scored and Ruzic was 1-for-4 with one run scored. Reiss was 1-for-3 with two runs scored and Mallori Floyd was 1-for-4.

Game 2: Brewton 15, Warren County 3
In their second game of the tournament and first of two games Friday, Brewton picked up their first win as they rolled over Warren County of Tennessee 15-3.
Brewton scored seven runs in the first and third innings along with one in the fourth while holding Warren County to one in the second and two in the fourth.
Ruzic pitched three innings allowing one hit, one walk and struck out four. Reiss pitched one inning allowing three hits.
Mary Madison Brown was 2-for-2 with one RBI and two runs scored and Hannah Lisenby was 1-for-1 with three runs scored. Longmire scored three runs.

Game 3: Leesburg 4, Brewton 1
One bad inning for Brewton against Virginia spelled a 4-1 loss and saw them fall to 1-2 at the SE Regionals in Tennessee.
After a scoreless first three innings for both teams, Brewton scored one run in the top of the fourth. The run would be Brewton’s lone run as gave up four runs to Virginia in the bottom of the fifth and won 4-1.
Ruzic pitched three innings for Brewton in the loss giving up one hit, two walks, and struck out one.
Reiss pitched the final two innings and allowed three hits, no walks, and struck out one.
Brewton made two errors in the loss, both in the fifth inning.
At the plate for Brewton, Reiss had one hit and Morgan Longmire had a fielder’s choice that scored Reiss for the lone Brewton run. 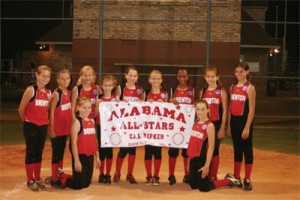