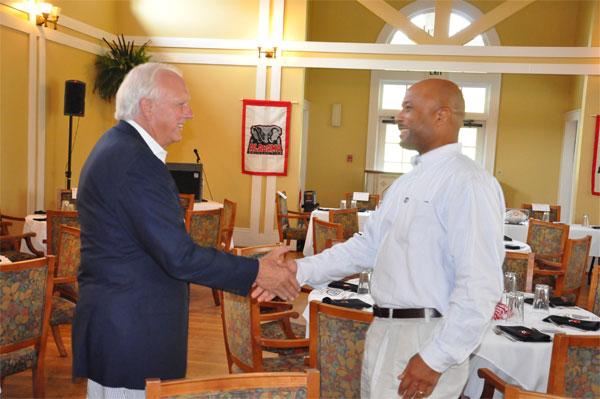 Moore, left, shakes the hand of Brewton's own Walter Lewis Tuesday night before the alumni meeting

Alumni and friends of the Escambia County chapter of the University of Alabama Alumni Association packed the Country Club of Brewton Tuesday night to hear director of UA athletics Mal Moore speak.
Moore’s service to the University of Alabama began more than 50 years ago as he joined the football team as a scholarship player for coach Paul “Bear” Bryant from 1958-1962. Moore is the only individual connected with the Crimson Tide program to be part of eight national championship teams (1961, 1964, 1965, 1973, 1978, 1979, 1992, and 2009). The first came as a player with the next six during his coaching career and the most recent as AD.
Moore, as a player and coach, was part of 14 SEC championships and 27 bowl trips. Also, under his leadership as AD, Moore’s teams have produced three national championships—the football championship in 2009 and gymnastic championships in 2002 and 2011.
Other teams at Alabama under Moore have won numerous titles and SEC tournament titles.
Since becoming AD in 1999 at the University of Alabama, Moore has overseen more than $200 million of capital improvements to athletic facilities.
Moore graduated from UA in 1963 with an undergraduate degree in Sociology and later in 1964 was awarded his Master’s Degree in Secondary Education.
Roger Chapman introduced Moore as the speaker and said the two had something in common.
“When I went to Alabama as an 18-year-old freshman, I was afraid of coach Bryant,” Chapman said. “Mal comforted me then because he was a 40-year-old man who was afraid of coach Bryant. I think there is a lot of truth in that Mal. Without a shadow of doubt, Mal’s accomplishments are unequal to anybody at the University of Alabama. His leadership, in my opinion, was crucial during some challenging times at Alabama and I am not sure we would have weathered those storms with his leadership of Mal M. Moore. The university paid tribute to him when they named the athletic complex after him. I think that was a good deed.”
Moore talked to those in attendance on enrollment figures, the university, the recent tornado, and hit on all sports teams on campus and talked about the 2011 football team and head coach Nick Saban.
“I have been to several cities across the nation and one recently in Chicago where they had a place called ‘The Houndstooth,’” Moore said. “That just goes to show you the love people have everywhere for the University of Alabama. We have a great president in Dr. Robert Whitt. We have great coaches in football and in all our sports. You buy your tickets to games and you are there. What a university. We have to value our university.”
Moore said the school is the fastest growing university in America.
“Last year there were 128 merit national scholars in the freshman class,” Moore said. “They could go anywhere they want for school, but they are choosing the University of Alabama. We are highly ranked in the universities that are attracting national merit scholars. That says a lot for our university.”
Moore said the university has broken enrollment record for five straight years.
“Students from all over America are coming to Alabama because of the beauty of the campus, the strength of the academics, and they like to be at a university that has a good football program. I think Dr. Witt uses the athletic department to grow the number of students. He is very supportive as our president and that is not true at all universities. One thing that impresses me is how the university recruits students. Dr. Whitt says that if a head football coach can sit by a phone and call a great football player or quarterback to play football, I can call them to come be a student. He works at that just like our football coach.”
Moore mentioned students coming for a wealthy part of Texas to attend Alabama.
“We had 31 seniors come from Highland Park High School in Texas,” Moore said. “You would like to just have 31 from Texas, moreless 31 from one high school. The year before that, Memorial High School in Houston, the top high school in Houston, we had 19 seniors come to Alabama. The next year we get the No. 1 golfer in the nation from the same high school. It just goes hand-in-hand.”

Tornado:
Moore said the tornado that hit the Tuscaloosa area in April was “stunning.”
“I don’t know if you have been there or you saw it,” Moore said. “I know you have probably saw it on TV, but whatever you imagine, it was worse. It was a terrible thing that happened to Tuscaloosa. The amazing thing though was how our students responded and how the players and former players responded. Everyone jumped in to help.”
Moore added that the progress that has been made in Tuscaloosa is unbelievable.
“FEMA workers there told us the damage done in Tuscaloosa was three times the damage of Katrina that hit New Orleans,” Moore said. “That is how massive it was. There are probably four to six more months of debris cleanup. It is making great progress and we are rebuilding.”
Moore said he thanks God the university was spared.
“I was in my office when the tornado was coming and I thought it was coming to the stadium,” Moore said. “I then thought it was coming to the back of Coleman Coliseum. It went by and I saw the huge back cloud behind the coliseum. We were OK on campus, but if you go a mile over, the damage is stunning. We were very fortunate. If it would have hit campus, I think it would have take 50 years to recover.”