Plane damaged after landing at airport 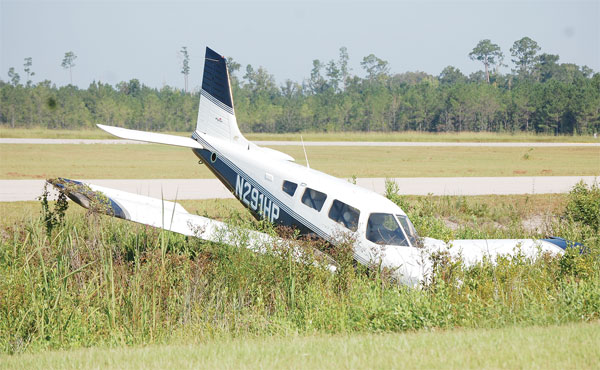 A pilot taxiing on a runway at the Brewton Municipal Airport ran off the runway and into a ditch Tuesday morning, damaging the plane but not causing any injuries.
Airport fixed base operations manager Freddie McCall said the pilot — Pell City Mayor William Hereford — walked away but the aircraft sustained significant damage.
“He was having mechanical problems to begin with,” said McCall, who answered the pilot’s radio call when he was preparing to land.
The plane landed but the pilot continued to have trouble with its rudder, McCall said, and Hereford ran into the ditch after he was on the ground.
“I was never in any danger,” Hereford told The Daily Home newspaper. “One of the rudder pedals failed after I landed and was taxiing. It caused the plane to veer left, and it went off in a shallow ditch.”
Hereford said he was alone in his plane, a Piper Archer III that seats up to four.
Hereford said there was “good damage” to the front end of the plane; however, the spinner and propeller were intact.
“It’s not like it crashed (out of the sky),” he said. “It’s largely superficial.”
Hereford was in Brewton to visit with city officials and learn more about the city’s Channel 6 local access station, which is used to broadcast local programming, including a talk show hosted by Mayor Ted Jennings and Roger Chapman.
Mayor Ted Jennings said Hereford mentioned the plane incident but simply said he had gone off the runway.
The Federal Aviation Administration will investigate because the plane had such severe damage, McCall said.
“There was nothing you could do to prevent it,” Hereford said. “It was a little part that went bad, we think. The FAA will investigate, but they always do that. It happened when I was traveling at a very low speed. Thank goodness it didn’t happen when I was landing.”
Hereford said no other planes were nearby when the accident occurred.
“He was very, very fortunate” to walk away uninjured, McCall said.
Daily Home reporter Elsie Hodnett contributed to this report.