Eagles fall in OT to Opp Thursday in preseason game 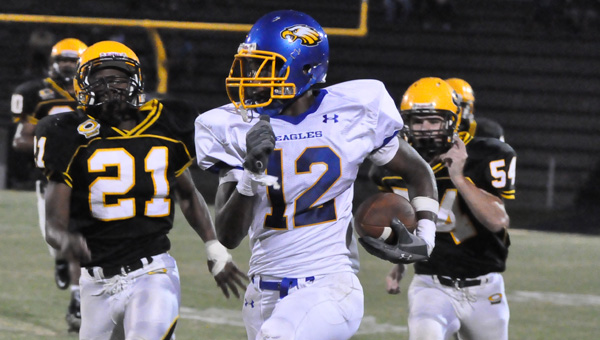 If it had been a real game, it would have been a loss in the record book for the W.S. Neal Eagles Thursday in a preseason game in Opp.
But while the game did not count win or lose, after coming off a winless 2010 and having only four overall wins in their last three seasons, a 20-14 overtime loss for the Eagles Thursday felt like a win.
The Eagles, under first-year head coach Doug Hoehn fell behind early 7-0 but tied the game and later held a 14-7 lead before giving up a late Bobcat score. With the game tied 14-14 after regulation, coaches agreed to do a normal overtime period and saw the Eagles lose by six.
“The kids played hard tonight, really hard,” Hoehn said. “We dropped a couple of passes and had a couple miscues on play calling, but overall I thought they did a great job tonight. I don’t think they have been in this position in awhile—when they were ahead number one. The defense was playing great and we got ahead and kind of lapsed there for a second and they went down and drove the ball down and scored. We have to learn how to finish and that comes from you having to learn how to win. Once we can do that, we will be alright.”
In the preseason game Thursday, non-starters for both teams played the whole first quarter and four minutes into the second quarter with starters taking over at the 8:00 mark of the second and playing the remainder of the game.
When the starters went in, the game was tied 0-0 with the Eagles at their own 16-yard line.
With the Eagles in punt formation, a bad snap rolled into the end zone and the host Bobcats fell on the ball to score first and lead 7-0 with 7:16 left in the second quarter.
From there, the Eagles would use a 11-play drive that ended with a 16-yard touchdown pass from Dylan Godwin to Ashton Elliott to get the Eagles on the board with 3:13 left before the half.
A failed PAT for the Eagles left the Eagles trailing 7-6 at the half after neither team scored the final 3:13.
To open the second half, W.S. Neal got inside the Bobcat 13-yard line but turned the ball over on downs.
Both teams would exchange the ball back-and-forth four times before the Eagles claimed a 14-7 lead with 3:46 left in the third when the duo of Godwin and Elliott hooked up for a 65-yard touchdown pass. A two-point conversion gave the Eagles a seven-point lead.
Opp would later tie the game at the 10:41 mark in the fourth quarter as they used a five-play 47-yard drive.
W.S. Neal had their chance to claim the lead with 2:44 left in the game, but a 35-yard field goal was short and gave the Bobcats the ball on the 20-yard line with 2:44 left in the game.
Opp would drive to the 17-yard line of the Eagles and missed a 34-yard field goal as time expired to send the game in overtime.
In overtime, the Eagles were on defense first and Opp scored on their first play from 10 yards out to take a 20-14 lead after a failed conversion attempt.
With the Eagles now on offense, a loss on first down was followed by a 4-yard gain on second and two incomplete passes in the end zone to see Opp get the win by six.
W.S. Neal had 362 total yards of offense in the loss with 135 rushing and 227 passing.
Marquese Banks led W.S. Neal rushing with 78 yards on 21 carries.
Elliott led W.S. Neal receiving with 121 yards and four catches and two touchdowns.
Quarterback Dylan Godwin was 10-for-24 with two touchdowns and 184 yards passing.
Opp had 103 yards rushing and 110 passing for a total of 213 yards offensively.
“Ashton had a good game tonight,” Hoehn said. “We need to work on our special teams. Special teams hurt us tonight. Field position killed us tonight. We did not field a couple of punts and we gave them a short field a couple of times. Some bad snaps led to one of their scores and kept us from another one so we need to clean up special teams. The kids played real hard and I am proud of them.”
W.S. Neal will play in their first regular season game Friday at home against Flomaton. Game time is set for 7 p.m. at W.S. Neal Stadium in East Brewton.