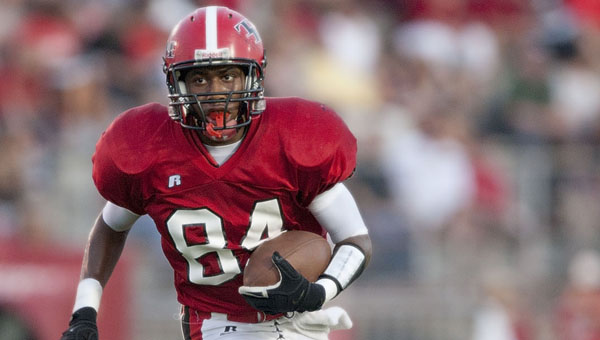 Ricky Curry runs for the Tigers Friday against Atmore

When you’re standing on your own 17-yard line and you have to score a touchdown in less than a minute to win a football game, that 83 yards that has to be covered might as well be a mile. And when a team has to do it with a new quarterback and a backfield, offensive line and receiving corps that is equally inexperienced, well, it can seem pretty daunting.
In that scenario, it’s always best to go on the “hunt” for a great pair of hands to come down with the biggest play of the game. And in the case of the T.R. Miller Tigers Friday night, that “hunt” turned out to find junior receiver Ryan Hunt. It was his athletic catch with :03.4 left that set up the game-winning score as the young Tigers somehow willed a 37-31 season-opening victory over Escambia County High School in yet another in a long line of instant classics between these two county rivals.
After Atmore scored with 1:02 left in the game to take only its second lead of the game – 31-29 – T.R. Miller junior quarterback Kevin Davis, making the first start of his career, engineered the last-minute thriller, leading his team on a seven-play drive that covered the 83 yards in 53 seconds. Along the way, he completed passes of 16, 39 and 27 yards, and capped the drive by diving over from the half-yard line for the win.
“That’s just par for the course in this rivalry,” said T.R. Miller coach Jamie Riggs, remembering the sting of last year’s 35-34 overtime loss to these same Blue Devils. “Man, what a ball game. I tell you what, if you want to see a great game early in the year, this is always one you know you’re going to get your money’s worth.
“I’m really proud of our guys for the way they finished tonight,” Riggs continued. “Being as young and inexperienced as we are, we could have given up when they scored there with a minute to go. But we showed some guts and played to the end and sometimes these ol’ TRM kids can make plays and win.”
For Hunt to even make the play is impressive in its own right, since he wasn’t even Davis’ first option on the play. Facing a third-and-10 from the 28, Davis (who finished 8-of-23 passing for 199 yards and a touchdown) was chased out of the pocket only to find that his primary receiver was covered. Going through his progression, he picked up Hunt drifting to the right front corner of the end zone and lofted his pass in that direction. As both Hunt and the ECHS defensive back leapt for the ball, Hunt out-jumped and out-fought his counterpart for the completion and brought it down just inside the 1-yard line as the crowd roared. Davis capped it off with the quarterback sneak to seal the thriller.
But don’t be mistaken; it just wasn’t the last couple of plays of the game that were exciting. The entire game was befitting of the No. 10-ranked team in Class 4A (Atmore) against 3A’s seventh-ranked team (T.R. Miller). After all, the Tigers totaled 467 yards – 268 on the ground (102 by senior Darrion Salter) and 199 through the air – while Escambia County countered with 191 passing and 181 rushing for a total of 372 yards.
From the very outset, it had all the makings of the nail-biter it eventually became. While the Blue Devils scored first to take a 6-0 lead, the Tigers overcame that to go up 7-6 and eventually had as much as a 26-12 lead in the opening minute of the fourth quarter.
“Every time they scored, we seemed to answer,” said Riggs, but added with a chuckle, “every time we scored, they seemed to answer.”
While Tiger super sophomore Kameron Coleman (15 rushes, 70 yards) was leading the Tiger scoring surge with a pair of first-half touchdowns and three for the game, any cushion his teammates enjoyed was pulled out from under them with long scoring plays from the Blue Devils.
A 4-yard run by Tywon Dixon was the shortest scoring play of the night for Escambia County. Along the way, it tallied touchdowns of 13, 86, 50 and 16 yards. And three of those came within two minutes of T.R. Miller getting in the end zone.
“We’ve got to find a way to avoid those kinds of big plays,” admitted Riggs. “They threw over our heads a few times and we gave up the kickoff return for a touchdown too … but those are things we will work on.”
After the Tigers scored to take a 26-12 lead with 11:51 to go in the game, Tyjustice Brown scooped up the ensuing kickoff and raced 86 yards virtually untouched to close the gap to 26-19. Four minutes later, T.R. Miller’s Davis put his team up by 10 with a 40-yard field goal that seemed to put it out of reach.
But, again, with one single play Escambia County was right back in it as sophomore quarterback Christopher Johnson connected with Carl Staples on a 50-yard scoring strike, making it 29-25. Six more minutes ticked away but T.R. Miller failed to put the game away when it had the chance inside Atmore’s 30-yard line, and Atmore’s Tywon Dixon capped an 8-play drive with a 16-yard run to make it 31-29 with 1:02 remaining, setting up the Tiger heroics.
“We knew there wasn’t much time, so we were just trying to get the ball in the right hands,” said Riggs of that last drive. “We didn’t panic, and that’s something that really came through. You can’t say enough about the way our offense handled its business in such a pressure situation.
“We can build on this.”
The Tigers stay at home next week and take on No. 10 Bayside Academy.