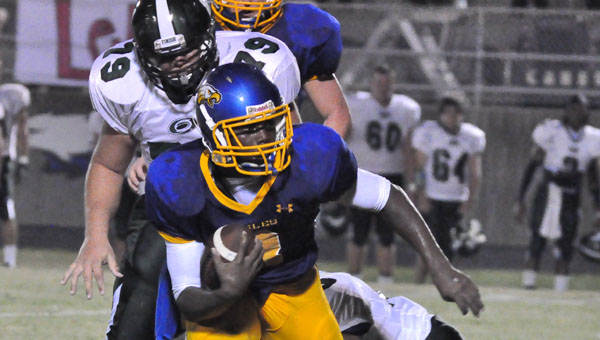 Marquese Banks runs for W.S. Neal in their loss to Flomaton Friday

It was not the season opener, home opener or first game for the W.S. Neal Eagles or head coach Doug Hoehn wanted to see Friday night at home against Flomaton.
Fumbles and penalties for the Eagles along with the play of Hurricanes Neiko Robinson and Ryheem Dixon burned the Eagles in a 47-14 Flomaton route Friday night in East Brewton.
With the loss Flomaton starts the season 1-0 while W.S. Neal falls to 0-1.
Flomaton scored 20 first quarter points and held a 27-6 lead over the Eagles and added 20 more point in the third quarter to aid in the 23-point win.
W.S. Neal surrendered 494 yards of total offense to the Canes with 381 coming on the ground and 113 in the air.
“We didn’t play very well at all,” W.S. Neal Eagle head football coach Doug Hoehn said. “At times, we played well at some points I saw. I don’t want to take anything away from Flomaton, but we did not play very well at all. It was not because of lack of effort. We were to pumped up and not focused. We had a pretty good week of practice too so it kind of surprised me. They did not do their reads on defense, they did not do their responsibilities.”
Hoehn said some mixed up play calling again and turnovers absolutely killed his team along with penalties.
“Last week, we had three penalties (against Opp),” Hoehn said. “We had not turnovers and that is the type of game I like to see and I am used to coaching in. I don’t know what happened tonight. We will fix that this week. Again, not taking anything away from Flomaton. They played well and I just wished we could have played better and get in the game. They played well and we did not play well at all. As coaches we are going to have to figure out to make us better next week.”
Flomaton’s quarterback Dixon and No. 10 Neiko Robinson scored six of the Hurricane’s seven touchdowns. Dixon had 202 yards rushing on the ground in the win.
“Their quarterback is a great athlete,” Hoehn said. “Him and No. 10, they are good athletes. We knew they were the ones we would have to stop. It was the quarterback and No. 10 that hurt us.”
W.S. Neal had four fumbles in the loss, one on the opening kickoff.
For the Eagles in the loss, Marquese Banks had 118 yards rushing on 21 carries.
Ashton Elliott had five catches for 56 yards and one touchdown and D.J. Hodges had two catches for 28 yards and one touchdown.
Dylan Godwin was 11-for-24 for 100 yards and two touchdowns.
W.S. Neal had 289 yards of total offense with 189 on the ground and 100 in the air.
Next week, the Eagles travel to UMS-Wright for their first region game of the season.
“We have to get better,” Hoehn, said of the match up with the Bulldogs.
Game time is set for 7 p.m. in Mobile.