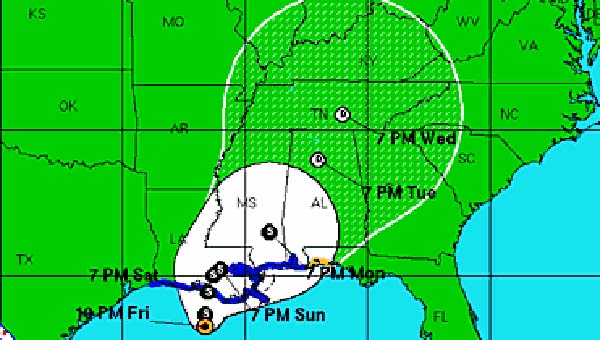 Tropical Storm Lee may not cause damage from extreme winds, but emergency preparations are being made in the event flooding occurs in the path and wake of the storm.

Escambia County Emergency Management Director David Adams said Friday the storm probably won’t be packing much of a punch, but it will be causing other concerns.

“Forecasters are projecting mostly rain with this storm,” Adams said. “Actually the heart of the storm was expected to have stayed away from our area, but now the projection has it slightly to the north of us, which will cause some concern.”

With the storm coming in from the Gulf of Mexico, Adams said the potential for large amounts of rain will be probable — especially if the storm maintains its current speed.

“The way the storm is coming it will be pulling water and moisture in from the Gulf as it comes this way,” Adams said. “We will see some rain through Sunday but the amount of rainfall will probably increase Sunday through Wednesday. That’s when we will be seeing some possible flooding. This storm was only moving at about 2 miles per hour. That slow movement could cause a significant amount of rainfall in a short amount of time.”

Based on areas of damage in a December 2009 flash flood in the area, county officials are also keeping an eye on the storm.

District 4 County Commissioner Brandon Smith said the current conditions of rivers and creeks around the county may help if large amounts of rain are seen from the storm.

“I think probably over these two or three days, I feel like it will be spread out and we won’t have to worry so much about flash-flooding like we did back in 09,” Smith said. “I feel like as dry as it is around here, that rain spread out over three or four days, I don’t think it’s going to cause us that much problem.”

That December 2009 flooding caused an extreme amount of damage to roads and bridges throughout the county. Since those bridges have been replaced, Smith said he believes the new structures will provide ample safety and reliability.

“I’ve got 100 percent confidence in those new bridges,” Smith said. “We may have some problems that pop up in other areas, in some of the older areas but as far as the new construction that we’ve had, I wouldn’t be afraid of it at all.”

Flooding may occur, Adams said, with a projected 5 to 7 inches of rainfall over the three days from Sunday to Wednesday.

“If we get that much rain in three days, we very well could see some flooding of areas,” Adams said. “There is more potential for flash-flooding in low-lying areas and we may see some creeks and rivers reach flood stage.”

Although the National River Forecast Center hasn’t projected major flooding, some areas in Escambia County may see the possibility of flooding increase over the first of the week.

“Atmore is really flat and they could see some problems with flash-floods,” Adams said. “Since Atmore is such a flat area there is really nowhere for the rainwater to go quickly and that’s what causes problems.”

Smith said the possibility of standing water around Atmore is almost certain, but should clear quickly.

“When you have a low lying area like we do around Atmore you’re going to have some water standing for sure,” Smith said. “But, I don’t think we’re going to be affected by it like we were in ’09.”

Adams is encouraging residents throughout the county to remain aware of changing conditions and to be prepared to take emergency steps if needed.

“With this storm, as with any storm, it’s important to pay close attention to weather conditions and to have a plan in case of an emergency,” Adams said. “People need to stay tuned to local radio and television stations and to NOAA Weather Radio for possible watches and warnings. This storm may not be a hurricane when it reaches us, but there is always the potential of tornadoes forming from the storm and some isolated strong wind gusts.”

Adams said extra caution should be exercised in areas where flooding occurs or has been known to flood in the past.

“We have areas around the county that can flood in a matter of minutes if the right conditions are in place,” Adams said. “If you live in an area that is prone to flooding with heavy rainfall, be cautious. It’s always better to be safe than sorry. I know people are tired of hearing the old phrase ‘don’t drown, turn around,’ but it is such words of wisdom. When there is water over the roadway, you just never know if there is even a roadway left under that water.”

No information concerning evacuation shelters or emergency response by the American Red Cross was available as of press time Friday.