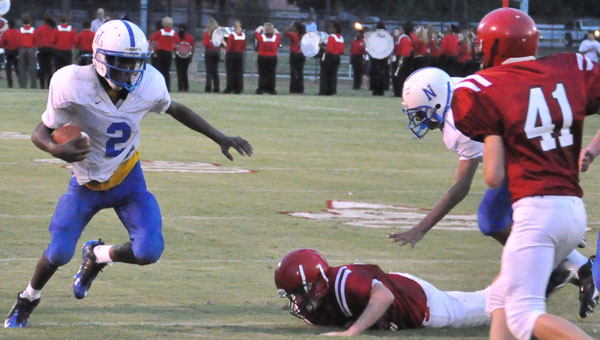 A 14-game win streak for the Brewton Middle School football team—that started after a 2008 loss to W.S. Neal Middle School—came to an end Thursday in Brewton in a crushing way as the Tigers lost 56-22 to…the W.S. Neal Middle School Eagles.
The Eagles scored 30 first quarter points and racked up 352 yards of total offense, all coming on the ground, for their first win of the season in their first game.
The win for the Eagles improved them to 1-0 while Brewton fell to 1-1.
Eagles Quenton Samuel rushed for 184 yards on 10 carries and had four touchdowns while teammate Malcolm Hawthorne had 141 yards on eight carries and two touchdowns.
Hawthorne also had an 81-yard kick return for touchdown and a 65-yard return for a touchdown for a total of 287 all-purpose yards.
Along with the 352 yards of offense, the Eagles had 12 first downs with nine coming in the first half. Of the Eagles 352 yards of offense, 296 came in the first half.
Brewton Middle School had 241 yards rushing and five yards passing for a total of 246 yards and six first downs.
Brewton had three fumbles in the loss and one interception.
W.S. Neal led 30-0 after the first quarter and 42-8 at the half. Both team scored six points in the third quarter as W.S. Neal took a 48-14 lead and both teams scored eight points in the fourth quarter as W.S. Neal won by 34 points.
In a seventh grade quarter to start things off, Brewton won 12-6.
In the seventh grade game, both teams started out on fire as they used one play to go 70 yards for a touchdown.
W.S. Neal got on the board first with a 70-yard run from Daquain Kiser.
Brewton would respond with their own 70-yard run from Marcus Paul to tie the game at 6-6 with 9:18 left in the game.
After a W.S. Neal turnover on downs, Brewton took over at the W.S. Neal 37-yard line with 4:35 left to play.
The Tigers would use a seven-play drive to get another Paul touchdown to go on top 12-6 with 1.9 seconds left.
An Eagle pass as time expired fell incomplete as Brewton won by six.
Kiser led W.S. Neal with 83 yards on three carries and one touchdown. Paul led Brewton with five carries and 97 yards and two touchdowns.
Brewton finished with 138 yards and four first downs while the Eagles had 113 yards of offense and three first downs. All yards came on the ground for both teams.
In the eighth grade game, fireworks carried over from the seventh grade game.
W.S. Neal scored on an 81-yard kickoff return to start the game and after a Brewton fumble, used one-play to go 47 yards and lead 16-0 with 6:24 left in the first quarter. Both touchdowns came from Hawthorne.
After another fumble by Brewton, W.S. Neal used one play to go 50 yards, this time from Salter to lead 24-0 with 5:11 left in the first quarter.
After a Brewton punt, the Eagles used a three-play drive to score on a 29-yard run from Salter to lead 30-0.
W.S. Neal would lead 36-0 after a 19-yard run from Salter with 5:23 left in the second quarter before Brewton go on the board with 2:48 left before the half when Ahmaud Taylor scored on a 9-yard run to cut the lead to 36-8.
Salter would add a 31-yard touchdown run for the Eagles with 1:13 left before the half to give the Eagles a 42-8 lead at the half.
Brewton started off the third quarter and used a 57-yard fake punt touchdown run by Tamerick Jenkins to cut the lead to 42-14, but Hawthorne would give the Eagles a 48-14 lead with 1:43 left in the third quarter after he scored on a 1-yard run.
Hawthorne would later take a 65-yard punt return to pay dirt to give the Eagles a 56-14 lead over Brewton with 6:42 left in the game before Markail Mitchell scored the last touchdown of the game on a 39-yard run to see W.S. Neal lead 56-22.
Salter had 184 yards rushing to lead East Brewton while Hawthorne had 141.
For Brewton, Mitchell led with 121 yards on nine carries and one touchdown.
W.S. Neal Middle School will be back in action Thursday, Sept. 8 at home against Andalusia at 6 p.m. while the Tigers of BMS travel to Monroeville.