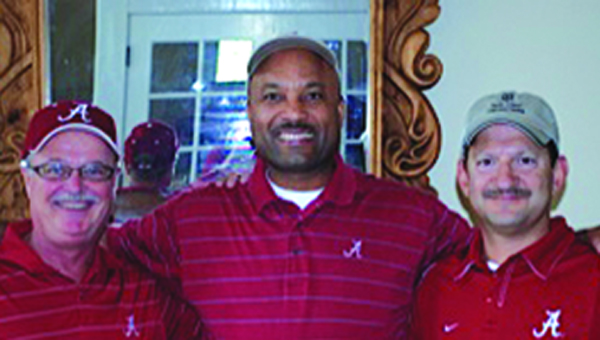 Walter Lewis, middle, with golfers from Crestview, Chuck Tolbert and Hollis Thompkins, who have been waiting to play in the tournament for four years.

A total of nine teams and 36 players took part in the 2011 Walter Lewis Scholarship golf tournament Thursday at the Country Club of Brewton.
The tournament is the eighth annual tournament benefiting the local scholarship fund.
Since 1995, the Walter Lewis endowed scholarship fund has awarded more than $21,000 to area high school seniors to help pave their way for their education at the University of Alabama.
“I had several opportunities to participate and get a quality education at Alabama,” Lewis said. “Mine was kind of self motivated a bit because I played sports. I had an opportunity to play sports and get an education. A lot of kids do not have that opportunity, but they are smart and they have goals and visions of things that they might want to do. This is a way for me to create an opportunity for kids to get scholarship money there to go to the University of Alabama and further their education and hope they will fulfill some dreams that they might have as youngsters growing up to be adults and contributing to our society.”
The tournament this year left behind great memories of a fun day of golf as well as an increase in the scholarship fund, named in honor of the University of Alabama quarterback (1980-1983). Lewis was on hand at the tournament to visit with the golfers and to show his skill with a golf club. Tobie Sheils, who played center for Alabama and fondly remembers defeating Miami in the Sugar Bowl in 1992, and Russ Wood, defensive end, 1980-1982 who played in the Liberty Bowl, Bear Bryant’s last game, competed in the tournament this past Thursday.
In fact, Wood’s team, sponsored by Gardnyr Michael Capital, Inc. were the tournament winners. The team members, along with Russ Wood, were David Stokes, Brad Byrne and Chip Byrne. The second place winner was a team from Evergreen made up of David Hyde, Tommy Chapman, Todd Watson and Phillip Harrold. Chapman donated his winnings back to the Scholarship Fund. The third place team was the Bank of Brewton team, made up of Charles McDaniel, Don Ward, Dr. Joe Terrell and Steve Anderson.
The annual tournament held each fall by the Escambia County University of Alabama Alumni Association is the primary means by which money is raised for the Scholarship Fund. Along with awards from the Curtis Finlay Scholarship Fund, five scholarships were presented to outstanding area high school seniors earlier this year at the Association’s annual meeting. Elizabeth Nelson, Allison Reid, Kristen Gehman, Kathryn Miller and Hannah Darby each received various scholarships based on grade point average, leadership, and community involvement and are all currently attending the University of Alabama.
Last year the tournament raised over $8,700 and the University matched that figure at 83 percent, which added just over $16,000 to the fund. This year the proceeds topped $10,000. With the matching dollars from the University, the Scholarship Fund will be increased by over $18,000, a figure which is bringing the Alumni Chapter closer to its goal of being able to award a full scholarship to the University of Alabama in the near future.
“We are extremely grateful to the many sponsors who contributed money this year, many of whom donate faithfully and generously every year,” Miriam McDaniel said. “These sponsors, along with the golfers, make each year’s tournament better and better, and are making it possible to offer financial assistance to students entering the University of Alabama.”