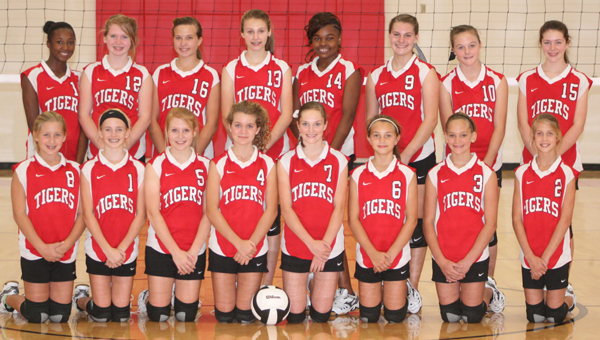 The Brewton Middle School volleyball team played their first game in their new gymnasium Thursday against McCall and started things out the right way—with a win.
The Lady Tigers improved to 3-3 with a 2-0 sweep of McCall.
Brewton won 25-22 in the first set and 25-8 in the second set to get the win in the first game of the double header and then won 2-1 in the second game. Brewton lost the first set of game two 25-21 but rallied to win set two 25-23 and the deciding third set 15-8 to get the win.
Brewton will be back in action Thursday at T.R. Miller, as they will take on W.S. Neal. Game time is set for 4 p.m. followed by JV action at 5 p.m. and varsity at 6 p.m.

Game one: BMS 2, McCall 0
In the set one win, Lizzy Pollitte led with eight service points followed by five from Amelia Peach and four from Mary Allison Peace.
In set two, Bridgett Casey led with nine service points, Peach added six and Morgan Manning had five in the win.

Game two: BMS 2, McCall 1
In set one of game two, Breann Huff, Peace, Payton Baxter and Taylor Austin all had four service points in the 25-21 loss.
In set two, Manning and Pollitte had seven service points each and Wade added four.
In the set three win, Erin Wade added seven straight service points and Peace had four.
“I’m very proud of how the girls played today,” BMS Lady Tiger head coach Kim Owens said. “In the first match we were able to get the 2-0 win because of some consistent serving and several hustle plays. In the second match we lost game one and we were down 23-21 in the second game and we were two points away from losing the whole match. But the girls showed a lot of character and found a way to win that game 25-23 and then got the 15-8 win in the final game. The girls were very excited that they got to play at least one game this season in the new school gym. This is a great facility and we are very fortunate to have something this nice in our community.”