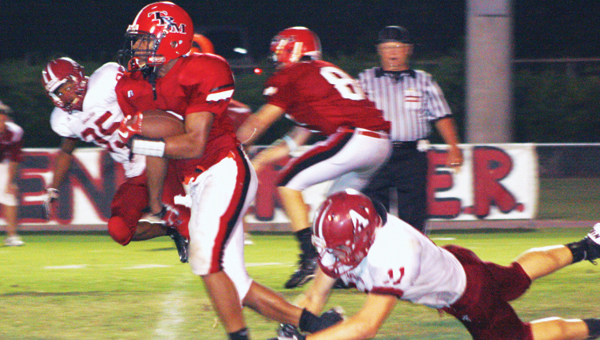 After suffering their lone regular season loss to the T.R. Miller Tigers last year in Andalusia, the visiting Bulldogs returned the favor this season to the Tigers of T.R. Miller in Brewton as they cruised to a 35-10 win.

“They whipped us soundly tonight,” T.R. Miller Tiger head coach Jamie Riggs said of Andalusia. “We never did get stopped. I’m proud of the way we fought to the end.”

T.R. Miller, ranked No. 8 in class 3A, had the first opportunity to score but were denied entrance into the end zone with Andalusia, ranked No. 7 in class 4A, making a 4th and goal stop at the 1 yard line to force the turnover on downs.

Andalusia was able to get the scoring started first Friday night when Ralph Sims raced 41-yards for his first of two touchdowns on the evening. After the touchdown the Bulldogs added a two-point conversion and held an 8-0 lead.

Following Andalusia’s 99-yard scoring drive T.R. Miller was able to drive down the field again this time settling for a field goal. Kevin Davis kick was good from 30-yards out.

Andalusia was able to add another score on their next drive with C.P. Rogers capping off the drive with a 5-yard touchdown run to give Andalusia a 15-3 lead.

T.R. Miller’s next drive was cut short when Kevin Davis’s pass was picked off by Andalusia’s Lakelyus Adams. Adams returned the ball 50 + yards before being brought down inside the Miller 5-yard line. After the turnover Andalusia’s Ralph Sims wasted no time adding his second touchdown of the game giving Andalusia a 22-3 lead going into halftime.

Andalusia started off the second half the same way it ended the first half; with a touchdown. C.P. Rogers was able to add his second touchdown of the game with another quarterback scramble giving Andalusia a 28-3 lead.

Andalusia added their final touchdown of the game late in the 3rd when Jacard Townsend was able to break off a nice 28-yard touchdown run.

T.R. Miller was a finally able to find the end zone when Andalusia’s Michael McCalman fumbled the handoff to his running back and Miller’s Dominique Jackson scooped up the loose ball and returned it for a touchdown.

Andalusia head coach Brian Seymore had this to say after the game, “We played very physical tonight, it’s always great to win on the road against a team like T.R. Miller.”

Andalusia will travel to Evergreen next Friday night to face the Hillcrest-Evergreen Jaguars.

While the game was not too impressive for his team Friday, Riggs was happy to see players back from the 1991 state championship 20th year reunion.

The team will continue their celebration today with a luncheon at the school and a video and remembrance time at 1 p.m. at the school’s auditorium.

Riggs said his team has got to do some work before getting back into region play next week.

“This was the first of four really tough games for us,” he said. “We’ll have to regroup and get to work. If we’ve got what I think we do, we’ll come back and win our game next week for homecoming.”

T.R. Miller will be back in region play next week at home against Clarke County for homecoming. Game time is set for 7 p.m. at Brewton Municipal Stadium with other festivities planned throughout the day.