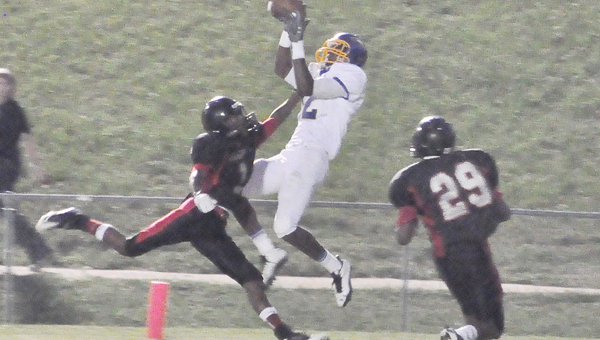 If it is not one thing for the W.S. Neal Eagle football team, it is another. After scoring on six plays to take a 6-0 lead over the Hillcrest Jaguars Friday night in Evergreen just 3:13 into the game, the Eagles were held scoreless the remainder of the game while the Jaguars scored 19 unanswered points on the Eagles to get the win by 13 points, 19-6.

With the loss in non-region play, the Eagles of East Brewton fell to 0-5 while the Jaguars improved to 3-2.

After seeing penalties and turnovers hurt them in their first four games of the season, W.S. Neal committed only one turnover Friday night fumble on their four play of their opening series in the third quarter. As for penalties, the Eagles had only two on the night for 10 yards.

Eagle coach Doug Hoehn said with those things cut down, it was his team’s inability to convert inside the red zone.

“The kids played hard. The Hillcrest kids played hard,” Hoehn said. “We did a better job on turnovers and we did a better job on penalties. I think we got down into the red zone two or three times and we have to convert when we get down there and score. That has haunted us some this year. We cleaned up the penalties and turnovers and that is a good thing, but we have to punch it in when we get in the red zone when it counts. The kids are playing hard. This really means a lot to them and we just have to go back to work again on Monday.”

After scoring on their opening series to lead 6-0 early after a failed two-point conversion, the Eagles held the Jaguars off the scoreboard in the first quarter to lead 6-0 heading into the second.

The Jaguars tied the game with a touchdown at the 6:26 mark of the second quarter and took the lead after a successful PAT.

From there, both teams turned the ball over on downs as the Jaguars led 7-6 at the half.

Hillcrest would claim a 13-6 lead over the Eagles with 7:41 left in the third quarter.

After an Eagle fumble on their first series, the W.S. Neal defense forced a Hillcrest punt but the next offensive series for the Eagles would stall at the Hillcrest 14-yard line as the Jaguars would hold a 13-6 lead over the Eagles heading into the fourth.

Hillcrest would add their final touchdown of the night as they took a 19-6 lead over the Eagles with 8:06 left in the game.

Trailing by 13 points, the Eagles turned the ball over on down on their next series but held Hillcrest to a punt to take over with 2:47 left to play.

Marquese Banks would break a 72-yard run to get the Eagles down to the Hillcrest 8-yard line, but on a fourth down, Eagle quarterback Dylan Godwin was stopped at the 1-yard line to give the Jaguars the ball back with 1:10 left to play and they would run the clock out for the win.

Banks led the Eagles rushing with 21 carries and 187 yards of offense. Godwin had 16 yards on 10 carries.

W.S. Neal will celebrate homecoming next week, as they will get back in region play against the Monroe County High School Tigers.

Game time is set for 7 p.m. at W.S. Neal Stadium in East Brewton with festivities planned throughout the day.