Miller hangs on for homecoming win 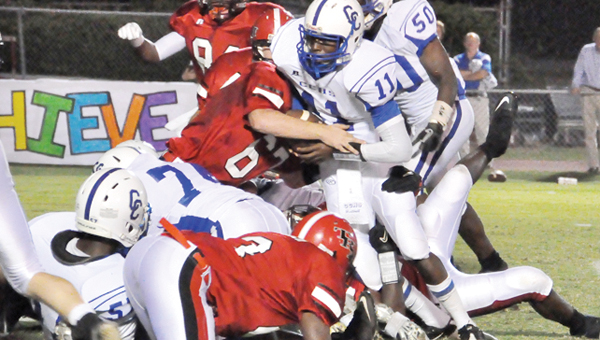 The fans in attendance at Brewton Municipal Stadium Friday night got their moneys worth on homecoming night as the T.R. Miller Tigers held on late for an eight-point, 14-6, win over the Clarke County Bulldogs.

While the Tigers (4-2, 3-1) picked up the important region win that almost solidifies a spot in the playoffs, a turnover with the lead late in the game almost cost the Tigers the win.

Leading 14-6 over the Bulldogs with 1:19 left to play in the game, T.R. Miller had the ball at the Bulldogs’ 10-yard line trying to add insurance points to their lead and run out the clock.

On second-and-seven, the Tigers fumbled and Clarke County recovered the ball and returned it to the T.R. Miller 30-yard line with 38.9 seconds left in the game.

After a holding call against the Bulldogs on first down, Kieon Smith intercepted a Bulldog pass at the 5-yard with 8.4 seconds left in the game.

With Clarke County still having timeouts left in the game, the Tigers ran two plays in victory formation to seal the win by eight inside their own 5-yard line.

“Well, I am proud of the players,” T.R. Miller Tiger head coach Jamie Riggs said. “We did everything we could to lose tonight it seemed, but we kept coming back and making some plays. So I am really proud of them. This was a big win tonight to try and regroup ourselves from last week (35-10 loss to Andalusia). They have a good football team. We got some turnovers tonight which helped and we needed them because we turned the ball over way too many times.”

As for the Tiger fumble late in the game that saw Clarke County return the ball into Tiger territory, Riggs said that is life.

“It is just life. Nobody wanted that to happen and it just happened, but we got them stopped,” Riggs said. “I thought one of the differences in the game was we kind of bottled the quarterback up in the second half. He has killed everybody. We got him bottled up in the second half and to hold them to six points says a lot about our defense.”

“The kids played their tails off and just never gave up,” Baxter said. “That is all we asked them to do is to keep playing and make them snap it over and over again and you never know what will happen. I think we got four turnovers tonight (three fumbles and one interception). It is always good to get turnovers. We have some room for improvement. We have a big challenge next week at Washington County, but tonight was a good victory.”

T.R. Miller looked well on their way to start the game with a good offensive drive, but the drive stalled at the 2-yard line and Clarke County took over on downs.

After a Bulldog punt, the Tigers got on the board first when Kevin Davis hooked up with Ricky Curry for the lone offensive touchdown of the night for the Tigers to give them an early 7-0.

Clarke County had their chance to score early in the second quarter, but the Tiger defense stopped them on the 1-yard line two times to keep a 7-0 lead.

A Tiger interception on the next series gave Clarke County the ball and they turned it into points but missed the PAT to keep the Tigers on top 7-6 with 6:59 left before the half.

From there, T.R. Miller would fumble, force a Clarke County punt, then throw an interception, get a Clarke County fumble, punt again, then go into the locker room at the half leading 7-6.

To start the second half, Kameron Coleman scooped up a Bulldog fumble and returned it 28 yards for the final touchdown of the night and give T.R. Miller a 14-6 lead.

The Tiger defense later stopped CCHS inside the 10-yard line and get another turnover on downs before getting the late interception to seal the win after the Tiger fumble was returned inside Tiger territory.

Davis finished 6-for-11 passing and two interceptions and Curry was the leading receiver with a 34-yard touchdown pass.

T.R. Miller will travel to Chatom next week to take on 5-1 Washington County. Washington County, ranked No. 4 in the recent ASWA poll, lost Friday night to No. 6 and undefeated Bayside Academy 35-28.