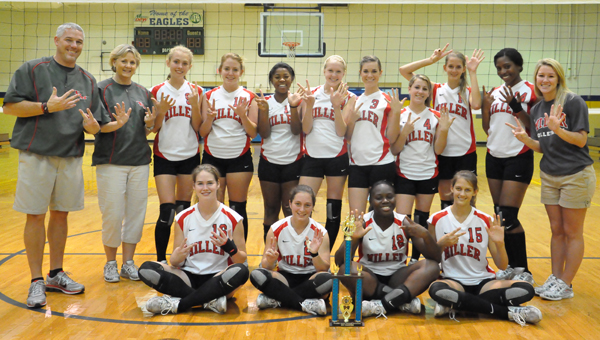 The Escambia County volleyball tournament began back in 2005 and every year since the tournament began, the T.R. Miller Lady Tiger volleyball has been crowned tournament champion.
Saturday, at W.S. Neal High School in East Brewton, the Lady Tigers made it seven straight championships as they claimed the 2011 tournament crown, but the seventh straight championship almost didn’t come.
After defeating Escambia County 2-0 in their first game Saturday, the Lady Tigers lost the first set of their second game to Flomaton 25-23. In the second set against the Lady Canes, T.R. Miller was down 14-3 and 15-6 and rallied to get a 25-23 win to even the match at 1-1. In the third and deciding game, the Lady Tigers defeated Flomaton 15-9 to get the win.
In their final match against W.S. Neal, the Lady Tigers won 2-0 to get the championship.
Overall, T.R. Miller took first place in the tournament with a 3-0 record followed by Flomaton in second place with a 2-1 record and W.S. Neal in third place with a 1-2 record. Escambia County placed fourth as they went winless at 0-3.
To start the games off Saturday, W.S. Neal lost to Flomaton 2-0 (25-12 and 25-23). After Flomaton defeated Escambia County 2-0, T.R. Miller defeated Escambia County 2-0 (25-7 and 25-14). T.R. Miller defeated Flomaton 2-1 and W.S. Neal defeated Escambia County (25-16 and 25-23) before T.R. Miller ended the tournament with a 2-0 win over W.S. Neal 25-12 in both sets.
“In the Flomaton game, I think we were down 15-5, I don’t remember exactly, but we were not doing a whole lot right,” T.R. Miller Lady Tiger head coach Greg White said. “I told the girls to just not look at the scoreboard, but to just play every point and have a little pride in you. I told them to just get back in the ballgame and we got back in the ballgame and luckily enough, we were able to pull it out and that catapulted us to the next game. It was a huge win. We have done that a lot in the last few weeks of getting behind and battling back, but it is what it is. We don’t like that, but we were able to overcome inconsistencies. I was proud of them for coming back and showing a lot of toughness and getting that done.”
White said his team used their height at the net to beat W.S. Neal.
The Neal game was I just thought we had a little advantage at the net and we just used that as the game went on,” he said. “Neal played hard and played tough, but I just think the advantage at the net was the difference in that ballgame.”
White said his team takes a lot of pride in winning the tournament seven years in a row. “We talked about that before we came over,” White said. “The tournament is only seven years old and we have been fortunate to win all seven. Again, we take a lot of pride in that and put a lot of stock in this tournament. It is big deal to us and we want to keep that going and hopefully we can keep that going for a few more years. We are really proud of it.”
W.S. Neal Lady Eagle head coach Jeff Haney said he had a lot of mixed emotions about how they did in the county tournament.
“I think the game we played the worst in is the game we won,” Haney said. “That being said, we did not play great in any of the matches. We had moments in each match where we looked pretty good. We are to the point in the season now, where not playing well for an entire match will end your season. We cannot continue to play at this rollercoaster type level and expect to have any success in the post season. We had several girls that played really well in the tournament, but this is a sport that really requires that total team effort. Kaitlin Hadaway and Stephanie Lambert played very well the entire day. They certainly earned their spot on the All-Tournament Team. We enjoyed hosting the tournament and want to thank all the fans from all teams that came out to support their schools.”
Along with Hadaway and Lambert making the all tournament team for W.S. Neal, Leah Brundidge, Taylor Guthrie, Amber and Karisa Nelson made the team for T.R. Miller.
T.R. Miller’s overall record improved to 23-3 while W.S. Neal went to 8-13.
Both teams were scheduled to play in their area tournaments this week.

FHS 2, WSN 0
Against Flomaton to start the tournament Saturday, W.S. Neal lost 25-12 and 25-23.
For the Lady Eagles in set one, Lauren Boatwright had one ace and Hadaway had one service point. Ashlyn Lambeth had two points along with Kendal Clayton and Paige Grantham had one ace.
In set two, Boatwright had five points and one kill and Lambert had three kills. Hadaway had three points and Grantham had one kill. Lambeth had two points and Gracee Dixon had one point and one kill.