EMA grant to aid in communication 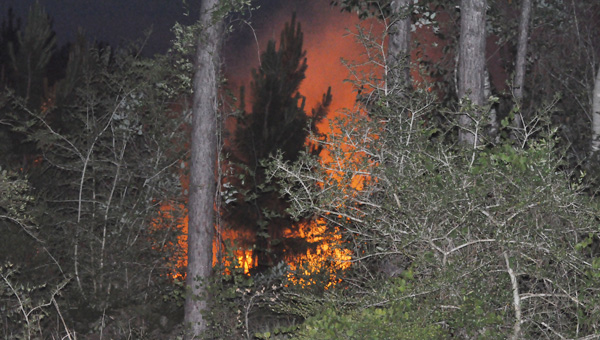 A blaze that burned several acres near Flomaton in June was responded to by several fire departments from across three counties. A grant awarded this week will create a system of communication for a variety of radios within multiple agencies.

A grant awarded to 17 counties by the Alabama Department of Homeland Security will help Escambia County be better prepared in times of emergency.

David Adams, director of the Escambia County Emergency Management Agency, said the funding would help in attaining a communications system that would allow multiple agencies to broadcast over a single system.

Adams said the unit being eyed by the department would be a portable unit that could be taken to the scene of the emergency allowing responders a quick and easy way of communication.

“We have a fixed radio bridge already in place in our area,” Adams said. “That unit will accommodate up to 12 systems, but it isn’t portable and can’t be used in the field where emergencies are. This portable tactical radio bridge is the most beneficial in our line of work.”

Just this summer, as many as six different agencies responded to a widespread blaze near Flomaton. Adams said the portable radio bridge would have been a benefit to the coordination of efforts at that emergency scene.

“Our command post had to use three different radios to communicate to all of the agencies during that emergency,” Adams said. “There were times when there were some who didn’t know what the others were doing because of that break in communication. This unit would tie all of those systems together.”

Adams said the bridge would allow radios to communicate even with different operating systems.

“There’s no way a UHF radio could communication with a VHF radio,” Adams said. “This unit will make everything work together. If we have another emergency that requires response from agencies from other counties or municipalities, having this unit in place will make the response more effective.”

The awards totaling $393,382 were awarded through a competitive application process and are part of the Interoperable & Emergency Communications Grant Program (IECGP) provided by the U.S. Department of Homeland Security.

Of the total amount of the grant award, Escambia County stands to receive nearly $7,500 in funding for the program.

The purpose of the IECGP is to improve interoperable emergency communications, including communications in response to natural disasters, acts of terrorism, and other man-made disasters.

Adams said the funding would allow the county to purchase the system and have it operational by Dec. 1.