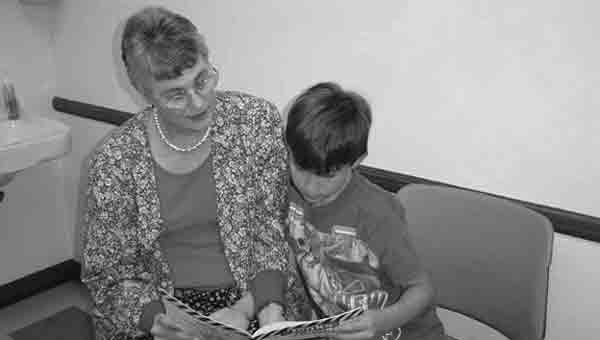 Raulerson is shown reading with a patient after being given a book at her pediatric offices.

National acclaim rarely comes to a resident of Brewton, but one local physician continues to be recognized for their contributions to mankind.

Dr. Marsha Raulerson, owner of Lower Alabama Pediatrics in Brewton, was recently honored by the National Alliance of Children’s Trust and Prevention Funds and the American Academy of Pediatrics.

The 2011 Dr. Ray E. Helfer Award was presented to Raulerson during a special ceremony held in Chicago, Ill.

Raulerson said the honor by the national organizations is one she is honored to receive.

“It was quite a surprise when I got the news,” Raulerson said. “I wonder why am I suddenly getting all of these awards. It makes me wonder what people think of my work. This is recognition or something that I always try to do and that is work on preventing child abuse.”

Kelley Parris-Barnes who serves as director of the Alabama Department of Child Abuse and Neglect Prevention nominated Raulerson for the award.

“The foundation of Dr. Marsha Raulerson’s private practice and the reason for her recognition throughout the state and nationally has been her steadfast dedication to the health, safety and well being of every child in the State of Alabama,” Parris-Barnes wrote in her nomination letter.

Dr. James C. Wiley, president of the Alabama Chapter of the American Academy of Pediatrics also submitted a letter of support for Raulerson’s nomination.

“Marsha Raulerson is an institution in the practice of pediatrics in Alabama and its role in shaping child health policy at both the local and state levels,” Wiley said. “But perhaps Dr. Raulerson’s best work has been conducted right in her own community in Brewton, the small town in south Alabama in which she sees mostly Medicaid patients.  Her influence and compassion extend well beyond the walls of her practice out to her community where she works tirelessly with her hospital, mental health center, children’s policy council, public health department and other agencies to create the most comprehensive medical home for her patients.”

The award honors the late Ray Helfer, considered the “father” of children’s trust and prevention funds, because of his belief that special funds could be used to ensure that our nation’s children grow up nurtured, safe and free from harm. Dr. Helfer’s lifelong dedication to children serves as a model for all citizens, and the distinguished award is given annually to a pediatrician who has made a demonstrated contribution to preventing child abuse before it occurs and is involved with activities related to the work of Children’s Trust Funds (CTF).

Dr. Raulerson is a 1978 graduate of the University of Florida College of Medicine, and served residencies at hospitals in Gainesville and Pensacola, Fla., before opening her private practice in Brewton in 1981. She currently serves on the Escambia County Child Death Review and Fetal and Infant Mortality Review for southwest Alabama. She is a charter member of the local Children’s Policy Council, which currently has the following major goals: prevention of infant deaths and drug court for addicted parents.

Last year, Dr. Raulerson led a team in her office working with the American Academy of Pediatrics on Practicing Safety: A Child Abuse and Neglect Prevention Project. She is presently chairman of Healthy Community/Healthy Children as part of the American Academy of Pediatrics and NICHQ (National Initiative for Children’s Healthcare Quality) Obesity Prevention Initiative. Many of these projects’ activities recognize the link between child abuse and obesity.

At the state level, Dr. Raulerson, as a past president of the Alabama Chapter of the American Academy of Pediatrics, initiated the first Child Health Forum, which brought together stakeholders concerned about children’s mental health. She has worked with the State Perinatal Advisory Committee to research the impact of drug abuse on pregnant women and to initiate partnerships, which bring treatment services to these women rather than punitive measures. She has also served twice in the past 15 years on updating the Department of Child Abuse Prevention’s statewide plan for preventing child abuse.

Dr. Raulerson considers her most significant contribution to preventing child abuse to be her participation in Reach Out and Read (ROR). This national program encourages parents to share books with their young children and mentors them in successful parent-child interactions starting in the first few months of the child’s life. The program includes giving every child she treats in her practice a free book to share with their caregivers. Seventeen years ago, she had the first ROR program in Alabama; there are now 62 primary care practices in the state participating in ROR.

Included among her many awards and honors are: 1978 – Present AOA Honor Medical Society; 1978 Luther W. Holloway Award for Excellent Performance in Child Health, University of Florida; 1989 Working Pediatrician of the Year for Alabama; 1992 Master Pediatrician, Alabama; 1993 Citation by the AAP for Outstanding Community Health Service for Children; 1995 Named Child Advocate of the Year by Contemporary Pediatrics; 1997 Alumna of Distinction, University of Florida (one of 47 women chosen to represent 50 years of women at U of F); 1999 The Chairman’s Award for Lifetime Commitment to Improving the Health of Children from Department of Pediatrics University of Alabama at Birmingham; 2002 Community Pediatrician AAP Award; 2003 Elizabeth Jenice Riley Memorial Award; 2005 Chamber of Commerce Citizen of the Year; 2006 Embrace Family Award (Children’s Mental Health) for Alabama; 2007 Rural Physician of the Year for Alabama; 2009 Hettie Butler Terry Community Service Award from University of Alabama Alumni Association.