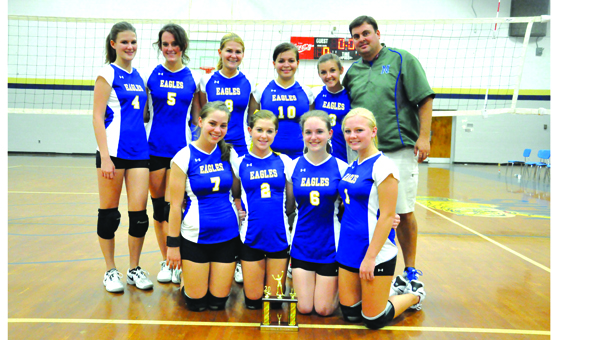 For the first time since 2008 and only the second time in school history, the W.S. Neal Lady Eagle volleyball team will be heading to the class 4A regionals.
The Lady Eagles last made the regionals in 2008 when they finished as area runner-up to UMS-Wright. W.S. Neal went to regionals at St. James and lost 3-1 to Catholic to end their season with an 8-13 record.
Tuesday night at Monroe County in the class 4A area 2 tournament, the Lady Eagles clinched their second regional spot as they finished as area runner-up to Monroe County.
The Lady Eagles defeated Jackson in their first game Tuesday before losing to Monroe County in the area finals to improve their record to 9-14.
The Lady Eagles rallied to beat Jackson in the first game 3-2 before losing to Monroe County 3-0 in the finals. The win over Jackson put them in the area finals as both the area champion and runner-up advance to regionals.
W.S. Neal will now advance to play Andalusia in Andalusia Saturday at 10 a.m. in the regionals.
“Obviously it is a disappointment to not win the area championship,” first-year W.S. Neal Lady Eagle head coach Jeff Haney said. “That was our goal, but we are proud to make the playoffs and to be going to regionals. It is a big thing for these girls. Most of these girls have not had much varsity experience until this year. So basically they have made the regional playoffs as first year varsity players. That is a big accomplishment. Against Jackson, we did not play our best and got ourselves in a hole. We battled our way back out of it. This game against Monroe, things just would not go our way. They were all close games and it is just one of those things that got away from us when we needed to have it. But we live to play another day.”
W.S. Neal, with only nine players on the team (two seniors, four juniors and three freshmen), defeated Jackson 25-18 in game one before falling 25-19 in game two and 25-21 in game three to trail 1-2 in the best three-of-five format. In game four, W.S. Neal roared back with a 25-10 win to even the series at 2-2.
In a back-and-forth-game five, W.S. Neal trailed Jackson late 14-13, one point away from seeing their season end. From there, W.S. Neal would outscore the Aggies 3-0 to get the win 16-14 and advance to the area finals.
Against Monroe County, W.S. Neal lost, 27-25, 25-15 and 25-22, but claimed the area runner-up spot.
In game one against Jackson, Lauren Boatwright had three points and Kaitlin Hadaway had seven service points, one ace and two kills while Stephanie Lambert had one block and four kills. Ashlyn Lambeth had two points and Paige Grantham had one kill, four points and one ace.
In game two, Hadaway had 11 total points with 10 straight, one kill and three aces. Grantham had one kill and Lambert had five kills.
In game three against Jackson, Boatwright had three points, Lambert had two kills, Hadaway had one point and one kill and Lambeth had one point. Kendal Clayton had one ace and Grantham had two points while Gracee Dixon had one ace.
In game four, Boatwright had 11 straight points to open the game with 15 total and one ace. Lambert had six kills and one block and Hadaway had two points, one ace and one kill.
Clayton had two points and Grantham had one kill.
In the fifth and final set against Jackson, Boatwright and Hadaway had one point and one kill each while Lambert had one kill. Lambeth had four points while Clayton and Grantham had one service point each.
In game one against Monroe County, Boatwright had one point, Lambert had one kill and Lambeth had five service points. Clayton had one point along with two kills and one point from Grantham. Dixon had six points and one ace.
In game two, Hadaway had two points and Lambert had one kill. Clayton had one ace and Grantham and Dixon had one point each in the loss.
In the third and final set against Monroe County, Boatwright had five points and Lambert had four kills. Hadaway had one kill and one point along with one point each from Lambeth, Clayton and Dixon.