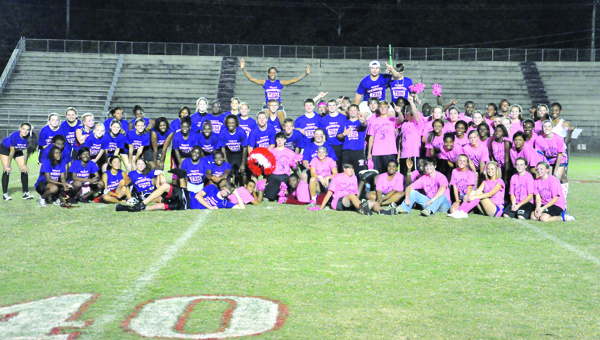 It was only fitting that T.R. Miller High School Relay for Life organizer Debra Mullis was out of town Tuesday checking on her mother, a cancer survivor, in Birmingham.
On the day of a scheduled Powder Puff football game at the school, Mullis returned late Tuesday only to arrive at the game at Brewton Municipal Stadium where she was excited to see the crowd of people who had came to watch the game and donate to the school’s relay fund.
“I had an family emergency and had to be away on Monday and Tuesday,” Mullis said. “When I got back from Birmingham, I rushed up to the school and when I pulled up at the school and saw all the cars in the parking lot, I screamed. I was so excited. My mom is a survivor from cancer and raising money for the American Cancer Society is so important to me.”
While gone, Mullis said she depended on T.R. Miller students Haylie Spinks and Patrick Weaver a lot the last two days.
“I would think of something that needed to be done, send them a message and they got right to it,” Mullis said. “I owe a huge thank you to the both of them.”
In the game Tuesday night, girls played football while the boys from the classes cheered.
“We raised over $800 last night,” Mullis said. “That is amazing. The pink team, which consisted of sophomores and juniors, won the game. We had right at 100 students participate, which were players and cheerleaders. The teams were divided up by their grades. Freshman and seniors were on the purple team coached by Mrs. Watson and Mrs. Clements. The sophomores and juniors were on the pink team coached by Ms. Dunaway and Mrs. McIntyre.”
While the event was a success, Mullis said there were plenty of people to thank.
“The flyer that we used for advertising the Powder Puff game was done by Sierra Morris,” Mullis said. “I appreciate her willingness to take time out of her schedule to do that. I would like to thank the YMCA, Mr. Stephen Dickey for the use of equipment used at the game. Also, thanks to the community for coming out and supporting the event. Most of all thanks to the students. Without their eagerness to participate this event would not of happened. Big heart felt thanks to the teachers and staff at T.R. Miller. I can’t express how much I appreciate everyone’s input to make this event happen. Mrs. Clements and Mrs. Watson took care of the T-shirt distributing for me on Monday, they too did an outstanding job. Thanks to Randy Salter with Brewton Screen-printing for doing a rush job on the team’s shirts. They were so cute and the students loved them.”