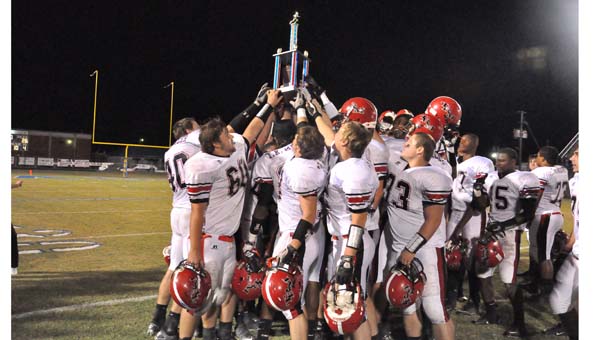 The 2011 Battle of Murder Creek and 69th overall meeting between the two teams lived up to its name Friday night in East Brewton: a battle.
In a game that pits cross-creek rivals T.R. Miller and W.S. Neal against each other, the No. 10-ranked Class 3A Tigers (8-2) got all they could stand and more from the Eagles of East Brewton (1-9) as they edged W.S. Neal 26-14 Friday night.
The win in the rivalry makes it four straight wins over the Eagles for the Tigers and improves T.R. Miller’s regular season record to 46-20 in the rivalry over W.S. Neal and 3-0 in the playoffs for an overall record of 49-20.
T.R. Miller jumped out to a 7-0 lead over the Eagles with 5:49 left in the first quarter and claimed a 14-0 lead over W.S. Neal with 10:00 left in the second quarter.
From there, the Eagles cut their deficit to 14-6 with 5:55 left before the half. An onside kick set up another W.S. Neal touchdown seven plays later to tie the game at 14-14 at the half.
In the second half, T.R. Miller added touchdowns in the third and fourth quarter and kept the Eagles off the board to get the 12-point win.
“I am just glad to win the game,” T.R. Miller Tiger head coach Jamie Riggs said. “We made some mistakes down there in the second quarter in the kicking game and gave them some momentum and they did a really good job of taking advantage of it. I give my hat off to them for that. But finally down there in the second half, we got a few turnovers and got them blocked some and was able to get the ball in the end zone. I am proud of the kids for bowing up. We were really discouraged at halftime and kind of feeling sorry for ourselves. You don’t win this game feeling sorry for yourself.”
Firs-year W.S. Neal Eagle head coach Doug Hoehn said he thought both teams played really hard Friday night.
“I give credit to both teams. Our kids played hard every snap and I think the (T.R.) Miller kids played hard every snap,” Hoehn said. This is a heck of a rivalry. These are some fun games. I look forward to some more. Heck, I wished we could play them again next week. I really do. We are young this year and just trying to learn how to play football. The kids have grown through a lot. My program is vastly different than what they are used to. They are catching on to it. We will not have these mistakes next year.”
Hoehn said the game came down to turnovers and penalties from his team.
“I don’t want to take anything from Miller because their kids played great,” he said. “This was a big game, their coaches do a fine job, but it came down to a couple of turnovers and penalties. And we are learning how to compete this year and it is no different from any other place I have been in my first year of taking a program over. I anticipate a huge improvement next year.”
In the first half, T.R. Miller was forced to punt on their first series and W.S. Neal fumbled on their first series to set up T.R. Miller’s first touchdown of the night — a 30-yard run by Darrion Salter.
After the T.R. Miller touchdown, the Tigers intercepted an Eagle pass and would later punch the ball to go on top 14-0.
W.S. Neal answered with a touchdown and an onside kick and another touchdown in the second quarter to tie the game at 14-14 at the half.
The Eagles opened the second half on the move and go down to the Tigers 4-yard line and scored, but a holding penalty took points off the board and two plays later, the Tigers picked off an Eagle pass and would later add a touchdown to go on top 20-14 with 5:14 left in the third quarter.
After a W.S. Neal punt on the next series, the two teams swapped fumbles as the Tigers lead by six going into the fourth quarter.
In the fourth, the Tigers were forced to punt, but held W.S. Neal on downs before having to punt the ball again to the Eagles. From there, the Eagles drove to the Tigers 42-yard line and faced a 4th-and-2 and came up inches short to give the ball back to the Tigers who added the final touchdown of the night with 1:54 left in the game to go on top 26-14.
The Eagles would turn the ball over on downs and T.R. Miller took two snaps in victory formation for the win.
T.R. Miller racked up 268 yards of offense in the win with 225 rushing and 43 passing. The Tigers had 104 rushing in the first half and 121 in the second with 23 yards passing in the first and 20 in the second.
W.S. Neal had 289 yards of total offense with 241 rushing and 48 passing. The Eagles had 77 yards rushing in the first half and 164 in the second while getting 37 yards passing in the first half and 11 in the second.
Darrion Salter led the Tigers rushing with 159 yards on 17 carries and one touchdown while Kameron Coleman had three touchdowns and 26 yards on eight carries. Kevin Davis was 4-for-7 passing with 43 yards. McHenry Coleman led with one catch for 17 yards.
For W.S. Neal, Marquese Banks led with 153 yards on 25 carries and both the Eagle touchdowns.
Christian Purvis was 5-for-13 passing with two interceptions and 48 yards. Ashton Elliott led with two catches and 19 yards.
T.R. Miller will advance to the first round next week as they host Greensboro. W.S. Neal finishes their season 1-9.
Greensboro lost to Brother Martin (La.) Friday night, 44-0.