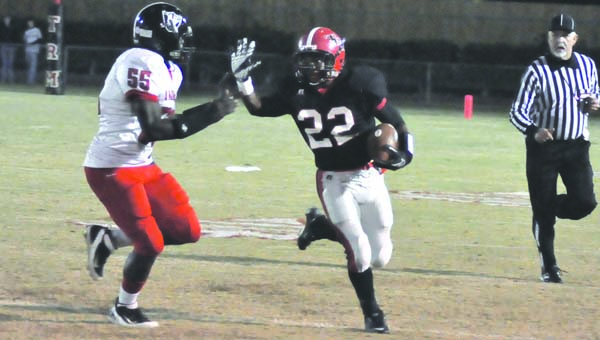 A combination of offensive and defensive success spelled a win Friday night for T.R. Miller in the first round of the Class 3A playoffs at home.
The Tigers beat Greensboro 55-12 to set up a second-round game at Handley next week.
The No. 7-ranked Tigers (9-2) used an offense that racked up 382 total yards in the game and defense to get the 43-point. On the defensive side, it was three interceptions with two being run back for touchdowns that aided in the win.
“It took us a little while to get adjusted to them,” T.R. Miller Tiger head coach Jamie Riggs said. “We knew they had great speed and some tremendous athletes, but they kind of came out and did some things differently on offense and it took us awhile to get adjusted to it. I thought our defensive players and defensive coaches did a good job of doing that and after we kind of figured some of it out a little bit, we handled it much better. I didn’t think we blocked particularly well in the first half, but we did a much better job there in the second half. Of course the two big interception returns were a huge deal.”
Tiger defensive coordinator Chris Baxter echoed the praise of the Tiger defense Friday night.
“We are a battling bunch and we are a tough bunch and we get after it,” Baxter said. “We made some adjustments and the kids responded to that. What is most important right now is when the kids see something new they respond to it. We do our adjustments and we make the most of it. When you get three picks (interceptions) and two of those returned for a touchdown and a fourth down stop, it was a great night.”
The Tigers had 270 yards of rushing offense in the win and 112 passing. T.R. Miller had 149 rushing in the first half and 121 in the second while having 92 yards of passing offense in the first half and 20 in the second.
“We made some plays in the passing game tonight, but the way they were defending us, they walked everyone up in there and we were able to get a couple of big pass plays to get us going,” Riggs said. “The way they do that is, they put everyone in there (to stop the run) and it is kind of a hit and miss thing. They are going to make some big plays and at the same time, you are going to make some big plays, too.”
Beyond the action on the field, the other side of the winning recipe may have come in the color of the Tigers’ jerseys.
The Tigers broke out their black jerseys for the first time this season and improved their record in that color to 17-2. Their lone two losses in the black shirts came in 1993 (a 10-7 loss to Opp) and in 2001 (a 20-7 loss to UMS-Wright).
When wearing the black jersey, T.R. Miller has outscored opponents 617-221 and has four shutouts when wearing it.
“We took pictures in them yesterday, so I just told them to wear them tonight,” Riggs said.
For the Tigers rushing, Darrion Salter had 109 yards on 11 carries and Dominique Jackson had 60 yards on four carries. McHenry Coleman led with three touchdowns and 80 yards on eight carries in the win.
Kevin Davis was 5-for-11 passing with 112 yards and one touchdown.
Keion Smith had one catch for 47 yards and a touchdown in the win.
Greensboro racked up 284 yards of offense with 246 coming on the ground and 38 in the air. The Raiders had 118 yards rushing in the first half and 128 in the second while accumulating 38 yards passing with all coming in the first half.
The Tigers of Brewton are currently on a six-game winning streak after falling to Andalusia 35-10 in week five. Andalusia — which ended its regular season unbeaten — lost in the first round Friday night to Elmore County, 21-15.
Since the Andalusia game, the Tigers have outscored their opponents 178-62.
T.R. Miller will advance to the second round of the playoffs Friday and will travel to No. 2-ranked Handley, who improved to 11-0 Friday night with a 28-0 win over Slocomb.
Game time is set for 7 p.m. in Handley.