Five injured in shooting at party at Masonic Lodge 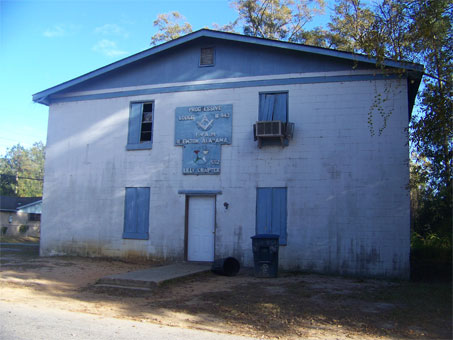 The Masonic Lodge on Brennan Avenue in Brewton was the scene of Sunday morning melee that left five people injuried from stab and gun shot wounds.

Three of the injured were teenagers, and all were Brewton or Atmore residents. Police are still sorting through the information and seeking suspects, police said.

“We received a call about 12:45 a.m. Sunday with a report of a stabbing and shooting going on at the Masonic Lodge,” Brewton police Sgt. Steven Ferguson said. “When we got there, two people had been stabbed and three people had received gunshot wounds.”

Ferguson said the events were the culmination of what began as a fight inside the building.

“There had been an altercation in the building and it spilled out into the parking lot where the stabbing occurred,” Ferguson said. “At some point after the stabbing took place, shots were fired, leaving three people wounded.”

Ferguson said the stabbing victims, a 14-year-old Brewton resident and a 19-year-old male from Atmore, were treated for their injuries.

“Their wounds weren’t life-threatening,” Ferguson said. “One victim received nine stitches and the other victim had about 30 stitches.”

As for the shooting victims, the injuries sustained by one individual were very serious, Ferguson said.

“A 17-year-old Atmore man was shot in the back during the incident,” Ferguson said. “The shot apparently went into his kidney and he was Life Flighted to U.S.A. Medical Center in critical condition.”

Ferguson said the victim’s condition had been upgraded to fair by Monday.

A second shooting victim was identified as Josh Hall of Atmore with the third victim identified as Brewton resident, Jeffrey Smith, police said.

“Hall was wounded by a shot to his hand,” Ferguson said. “Smith was shot in his left leg. None of the wounds was life-threatening.”

Ferguson said an investigation is continuing into the case in search of answers about how is responsible for the incident that wounded the five individuals.

The party at which the incident occurred was being held for a 15-year-old girl hosted by the girl’s mother, Twolla Drakeford.

“We will continue to look at the information we have already received and follow every lead in this case,” Ferguson said. “We do expect to make arrests in this incident.”

Ferguson said police were scouring through video footage from surveillance cameras in both Brewton and Flomaton.

“We’re looking at those tapes and pictures and I believe that will lead us to suspects in this case.”

The Sunday morning incident is the second in less than six months at the same location.

In July 2011, Brewton police arrested Ricki Tolbert, 18, of Atmore in connection with a shooting that took place at the lodge. Police reported that incident began as a fight inside the establishment and escalated to a shooting in the parking lot.

Although the victim in the July case was not seriously injured, Tolbert was charged with first-degree assault as a result of his actions that night.

Brewton police are asking that anyone with information in the recent shooting and stabbing incident to call the Brewton Police Department at 867-3212.