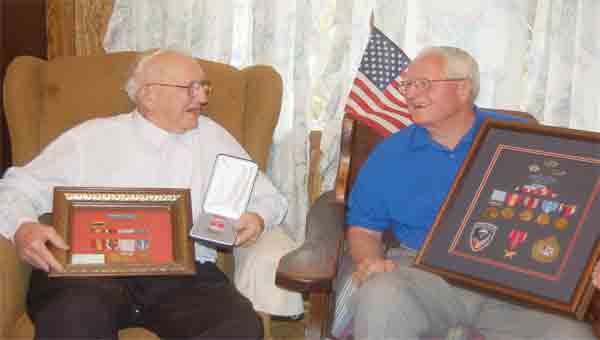 Bell, left, enjoys a laugh with Langham at his home near Flomaton Monday.

It took 60 years and a war to bring William Kilby Bell and Ray Langham together — even though they lived just 15 miles apart for most of their lives. If it had not been for the Korean War, the two could have spent the rest of their lives never knowing the other existed. They were both born in 1931 with Langham graduating from T.R. Miller High School in Brewton and Bell graduating from Flomaton High School.
Langham sold his dry cleaning business recently retiring with hopes of gaining some free time. But, like so many other retirees, he found himself at loose ends.
“I had too much time on my hands and decided to do some volunteer work for a few hours a week,” Langham said. “I know there is a big need for volunteers and it’s the Christian thing to do.”
Langham said he discovered Covenant Hospice was in need of volunteers to help make the lives of their patients a little easier. After giving just a little time for volunteering, Langham said Covenant Hospice was “a good fit for him.”
William Kilby Bell, who’s wife was a patient with Covenant Hospice when the two met, lives near Flomaton. The Bell’s name came to the top of the list at the same time Langham’s name bobbed to the top of the list of volunteers.
Langham’s assignment to visit with Bell gave the two a chance to share interesting conversations that led to talk of their experiences during the War.
The two began to notice that they remembered much of the same things and places. As they talked, each found a listener for some of their experiences. They discovered that they were both veterans of the Korean War serving there during the same time period. They could even compare notes on where they were, and found that they sometimes were very near to each other.
Through Covenant Hospice, the pair has developed a strong friendship. Even after the death of Bell’s wife, Langham continued to visit.
“The visits have made a big difference in our lives,” said Bell’s daughter, Polly Fuqua. “The visits have been great for our dad. He looks forward to them and they enjoy their talks together.”
Langham was just a young man when the Korean War began. He, as so many young men of the time, answered the call of their country and prepared to go to war. He joined the local National Guard Unit, and eventually the 187th Airborne Regimental Combat team. These are the paratroopers who would jump behind enemy lines and advance to catch the North Koreans in the middle.
“I spent several months in Korea,” Langham said. “We were both about 18 years old when we went into combat. Were we scared? You can believe we were, but it was our job and we didn’t have time to dwell on being scared. I think the word ‘courage’ applies to someone who does their job even though they are scared to death.”
After the war, Langham returned to Brewton, went to college and worked. He owned and operated Ray’s Cleaners for 48 years. Once he began volunteering with Covenant Hospice, Langham has found a calling of sorts.
Bell was 16 years old when he tried to get into the U.S. Army. He was sent away and told to come back when he was 17.
“I turned 17 the next day,” Bell said. “That was in 1948 before we even knew about Korea.”
Bell was sent to Fort Jackson, S.C. for training. After completing his training, he was assigned to the 24th Infantry Division heading first to Seattle, Wash., then on to Japan.
“I spent a while in training there and it was during training that I first heard about war with Korea,” Bell said. “I remember the day was June 25, 1950. I had a Japanese radio and heard the news as it came on the air. The men had been playing Black Jack and making a lot of noise. All of a sudden, things got really quiet and the card playing was over. We could feel the ship changing courses to take us back to Japan to get ready to go to Korea. I broke the news to our squad. We went back to camp, got our bags and was back on a truck in a short while. I swapped my gun for a Browning Automatic Rifle. I did a lot of shooting, but I never went to see if I had hit anybody.
“We lost a lot of men,” Bell added. “A company that went into combat and lost a large number was always being sent back from the front to add new recruits and training to go back in. One time I noticed something moving behind a little house. I stuck my gun around the corner and captured a North Korean. I took him back and turned him over to another group of soldiers. “
Bell came back home to Flomaton where he married his wife and had two children, Polly Fuqua and Randy Bell. He still lives almost in sight of where he grew up. He, as do so many, remembers the time he and his fellow soldiers went to war and, as he said, “We need to bring our soldiers home.”