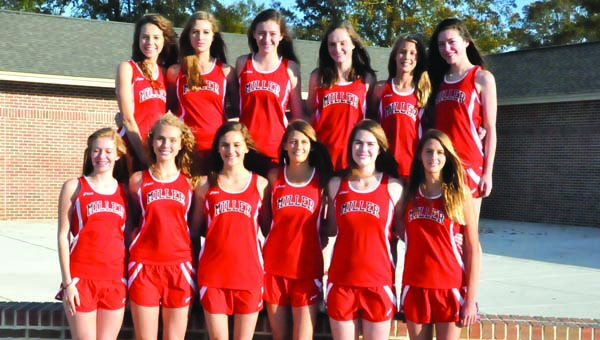 The T.R. Miller girls cross country team and boys runner Rob Stokes will compete in the AHSAA state cross country championships Saturday, Nov. 12, in Oakville, at the Oakville Indian Mounds Park Course.
The Lady Tigers have earned the class 3A state runner-up trophy three years in a row.
The Lady Tigers fell 18 points short last year to Rogers 60-42. The year before, the Lady Tigers lost by two points to Montgomery Academy and in 2008, came up seven points short also to Montgomery Academy.
The first race Saturday begins at 8:30 a.m.
T.R. Miller cross country head coach Rob Atkinson said the girls team has had a great season this year.
“Our girls have had an excellent season this year and we have competed hard each week,” Atkinson said. “I am proud of the effort that we put out. We are not as fast as we have been in the past in some places but we have shown improvement and that is really what I am looking for. They have done a really good job so far this year.”
Atkinson said the competition in the girls race this year will be tough.
“The competition this year is extremely steep this year,” he said. “Montgomery Academy is greatly improved and I would say they are the team to beat this year. Rogers has also improved every week and they are very, very strong. In competition, they did beat Montgomery Academy in a race a few weeks ago. It will be really tough for us. We will have to run better than we have ever run this year and last year and in the previous years because the competition is really, really strong. We should finish somewhere in the top-four, I would say.”
While the Tigers boys did not make the state meet as a team, Tiger Rob Stokes will compete individually Saturday.
“He has had an incredible season this year,” Atkinson said. “The only goal that I have set for him this year that he has not accomplished this year is to run 17 minutes. I am really looking forward to him racing on this course up there. The course Saturday us extremely fast. It is a good chance that he will do it. He has just been a tremendous runner for us this year. He has been the leader of our team. He and Karisa (Nelson) have just done an outstanding job for us this year.”
As the end of the season is one race away, Atkinson said there was thanks he needed to give.
“I want to thank coach Ash, Scott Huff and all the parents they have given us this year,” Atkinson said. “They have done a really good job of running our practices this year when I have had to be at football. We could not have done what we have done without them. They have been a big part of the success of the team so far this year.”