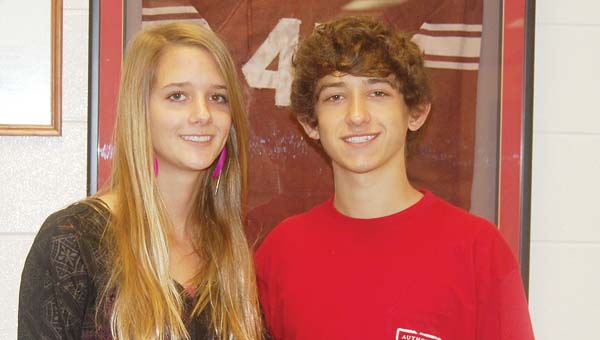 The field of more than 120 runners at the AHSAA state cross country championships didn’t know what hit them when two runners from T.R. Miller High School joined them for the meet.

The event was held at the Oakville Indian Mounds Park last weekend.

Rob Stokes, a junior, finished fifth overall in class 3A competition beating his all-time personal record in the process.

Karisa Nelson, a sophomore, took the top honors in the women’s class 3A state competition, also improving her time.

Coach Rob Atkinson said the wins for the pair was good for T.R. Miller, but also a great personal achievement for each of them.

“I’m really excited for Rob,” Atkinson said. “He had an excellent race. Karisa is just a wonderfully talented runner. They both did an excellent job.”

Although Nelson has been running since she was in fifth grade, Stokes just recently took up the sport.

“This has been awesome,” Stokes said. “I started running last year on the second day of school. I had told Coach Atkinson that I would start running for him in the tenth grade. He came and found me and got me started. I wanted to quit and even went to him to tell him, but he wouldn’t let me quit. I’m glad that I stayed with it.”

Stokes said this was the second year of competition for him with this meet the first chance he took on trying to win a title.

“I ran last year but I wasn’t in competition for the top spot then,” Stokes said. “I knew I had a shot for top five this year and did my best. I’m really happy with my time. I’ve been training for this since February of last year. We’ve never really stopped. We’ve slowed down a little, but we’ve kept at it.”

Nelson has been training for meets for several years and that work has paid off over and over.

“Karisa works hard and that’s why she’s good,” Atkinson said. “She has the third highest time in the state. In the four state meets she has competed in, she has taken first every time except her seventh grade year. She came in second that year but has moved forward since then. The closest competitor in this meet was a minute behind her. She’s just that talented.”

Nelson’s time has continued to improve through training and competition. That hard work has earned her a spot on an invitation-only event next weekend.

“I’ll be going to the Footlocker race the Saturday after Thanksgiving,” Nelson said. “It will be in Charlotte, N.C., and only the fastest runners can participate. My brother, Brandon, will also be there. He’s at the University of West Alabama and is the top runner there.”

Atkinson said Nelson and Stokes are part of a team that he said puts forth the one thing he wants to see more than anything else — effort.

“Of course we want to go out and shoot for first every time,” Atkinson said. “But, sometimes there are just teams that are a little better. The biggest thing I want to see put forth is effort. That’s a huge part of what we do and what we want to accomplish.”