Children have unusual ideas of what’s for dinner 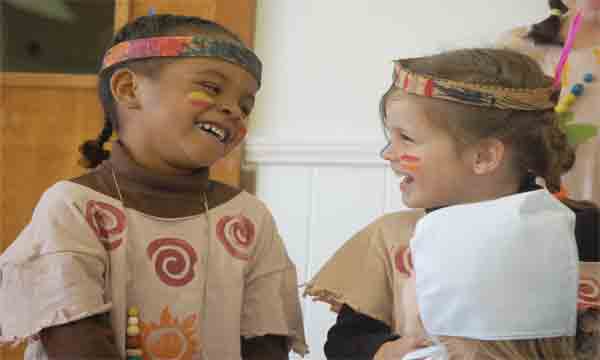 If the decision of what they eat on Thanksgiving Day is left up to the children at St. Stephens Preschool, there will be some strange items on the dinner table.
The tradition of having roasted turkey for Thanksgiving is not how something the children want to follow. Yes, they seem to connect Thanksgiving with the turkey, but their conception of where that turkey comes from is still a mystery.
The children who think they may sit down to a turkey dinner are not too clear as to where that turkey came from. Some of them plan to go into the woods and kill a turkey, but most of them think that the grocery store is the place to go.
“We are going to have deer meat,” said Dominick Milligan. “My dad will cook it on the grill. We plan on having turkey too. My dad and I will go hunting in the woods and get a turkey. It needs to be cooked for 100 hours and we will have cranberry sauce and carrots to go with it. We’re going to have shoefly pie for dessert.”
Brody Hayes thinks cooking the turkey for three hours is plenty long enough.
“I would put seasoning on it with sugar and we would have deer meat and apples to go with it.”
“I think you salt the turkey before you cook it,” said John Robert Jernigan. “I want corn to go with it. I think me and my daddy will go into the woods and find our own turkey.”
Logan Pettis doesn’t want a turkey but would settle for a chicken and some ham. “I want strawberries for dessert,” he said.
James Feeley plans on going into the woods with his dad and finding their turkey.
“I know you have to pull the feathers out of it and put it in the oven,” he said. “My mom didn’t tell me how to cook it.”
Parker Thomas has his own idea of what Thanksgiving will be.
“I want turkey and ham,” he said. “I would first put it in the sink and wash it really good. Then I would put salt and vinegar on the turkey and it would be humongous. Then I would have Ranch dressing on it. We will have pumpkin pie for dessert.”
Hailey Terrell also thought it would be a good thing to wash the turkey before cooking it.
“Just don’t wash it with soap,” she advised.
Maggie Wilson would not put the turkey into the regular oven.
“I think you would cook it in the microwave for 100 minutes,” she said. “Then I would like bananas and cranberry sauce to go with it.”
Edie Walker thinks cooking the turkey will take some time.
“I think you bring it home and put it in the refrigerator,” she said. “Then I would put salt and pepper on it, and cooking it for seven hours.”
Claire Smith isn’t too worried about what they will put on the table, because she is going to her grandmother’s house.
Riley Thomas plans on dousing his turkey with barbecue sauce.
John Moore is looking forward to having pizza, blueberries and strawberry pie.
Peyton Golden is not planning on having a traditional dinner.
“I think we are going to have chicken,” she said. “I think we are having spaghetti  and corn. I love spaghetti and hot sauce.”