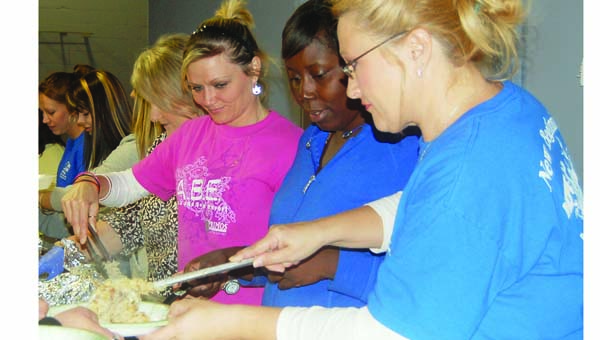 Church groups in both Brewton and East Brewton reached out Thursday to those in need — fulfilling what one minister said was Jesus’ gospel to serve those in need.
At Christ Kingdom Ministry Center in Brewton, church volunteers were joined by New Beginnings Church members who served up turkey, dressing and other traditional favorites for both shut-ins and those who came by for a meal.
Sandra Floyd, who helped organize the three-year-old project, said she originally thought she and her daughters might help a few people in need.
“I had about three or four families in mind,” she said. “But as the years went on, it just grew. It was really Pastor (Wayne) Cain’s idea to keep doing it, and now we do it as a group.”
This year was the first year New Beginnings members also volunteered to help.
Across town at Healing of the Souls Outreach Ministry in East Brewton, Janet Byrd looked like a symphony conductor as she directed dozens of workers in a concert of efforts to feed as many as 400 hungry people.
The traditional Thanksgiving meal was served up by members of five organizations led by Healing of the Souls, which Byrd oversees.
“There are so many people that have stepped up to help us continue this ministry,” Byrd said amid the clatter, chatter and laughter from the kitchen of the ministries East Brewton location. “We are the ones who are blessed.”
HOS volunteers were joined by congregation members and volunteers from Full Gospel Community Church, Liberty Baptist Church, Zion Hill Baptist Church and Shady Grove Community Church.
“We were here until 10 p.m. Wednesday night preparing food for folks,” Byrd said. “We planned enough food serve about 400 people. That was our goal.”
Volunteers were busy for more than an hour before the dining area open Thursday morning in preparing meals to be delivered around the community.
“We have people who are in need and just couldn’t get down here for the meal,” Byrd said. “We made arrangements to get meals to those folks. We delivered about 80 plates all across town. We have wonderful people who stepped up to make sure those meals go delivered while everyone else stayed here to prepare for those that could come by.”
Some diners gathered a little early for the 11 a.m. mealtime, Byrd said.
“We always have somebody to show up a little early, no matter what time we say we’re going to start serving,” Byrd said. “It doesn’t matter though, we make sure they get a meal when they do come.”
As the kitchen workers dished up dressing, sweet potatoes and the traditional turkey, the assembly line production hummed with conversation and laughter.
At Christ Kingdom, an assembly line of workers served up Thanksgiving dishes to be delivered to homebound elderly and for those who stopped by for a meal.
Cain, of Christ Kingdom, said the group normally serves about 150 people, with about three-fourths of the meals going to those who are homebound, with the rest for those in need or those who would otherwise be alone.
“It has filled all of those needs,” he said.
Cain said the Thanksgiving meals are an important way for church members to live the gospel, noting in particular the passage in Matthew in which Jesus tells his disciples that “whatever you did for the least brothers of mine, you did for me.”
“(Jesus’) gospel was a gospel that affected every living thing on earth,” he said. “It translated to very practical aspects of living.”