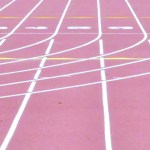 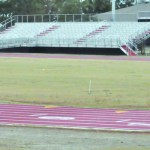 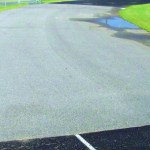 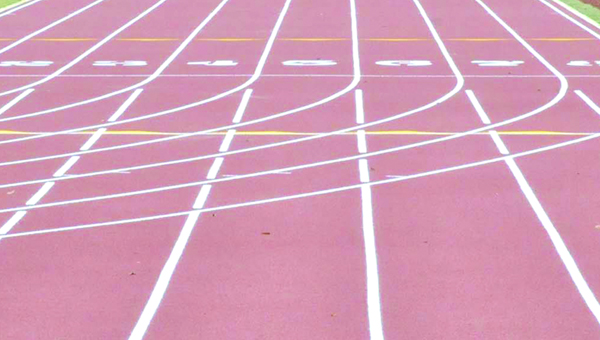 After almost a year since the first work started in December of 2010, the T.R. Miller practice field and new track facility is almost complete.
“The track is basically finished,” T.R. Miller Tiger head coach and athletic director Jamie Riggs said. “We have been waiting on the people to come in and do the surface. They did that about two weeks ago and they did a really nice and it is a first-class surface. We put a little bit extra into it making it a little bit thicker than some of the regular surfaces. It should be as fine of a surface as anyone has around here.”
Riggs said the lining crew came in this past week and marked the track.
“They worked this past weekend and did their part and they are outstanding,” Riggs said. “They did a great job with that and getting it lined off and ready to go. There are a few other details around as far as the track goes itself that we need to tend to, but for the most part it is finished.”
Riggs said there is still some work that needs to be done on the new practice field inside the track.
“We have some issues with sprinkler systems and some low spots so we have some work that needs to be done with that,” Riggs said. “I anticipate being on that here in the future. We finished this season up where we are (on the baseball field) and next season will be on the practice field. It is just going to take a little work and get the sprinkler system done and the field to be in the shape and take care of the low spots and a few other things. The track will be ready for the spring season.”
With the new track comes many new features.
“It is an eight lane track with two jumping pits,” Riggs said. “Those are on the YMCA side and in the end zone near the football field, we have the pole vault area. Then in the other area with the surface on it is the high jump area. We have that and we have a shot put area in one corner and the discus and javelin is on the field. We have everything we need there to go.”
Also in the new facility is a set of bleachers that holds around 500 people, Riggs said.
“We also have a shelter out there that I think will come in real handy for us,” Riggs said. “We can use it for football practice to have a place to cool off because there is not a lot of shade out there. We can cool off, take a break and drink some Gatorade out there. I’m sure it will be used for track meets for shelter to keep score and check-in for events. Then we can use it for other events to cook something or the M-Club might can use it for a cookout before the game. It has many uses.”
Overall, Riggs said everything looks really good.
“There are some more details to be done, but right now we are waiting for the track to be completed before we work on the field,” Riggs said. “We will deal with the field here in a few weeks and hopefully we can use it for spring practice.”
Also, the damage track at W.S. Neal will soon see work being done on it.
The track was damaged a few years ago by someone driving a construction vehicle over about 10 meters of it. The area was filled with concrete, instead of rubber surfacing, making the track uncertified by the Alabama High School Athletic Association to host home track meets.
While the track has been out of commission for home track meets, the Eagles have to travel to all their spring meets.
Former W.S. Neal Eagle track coach Rebecca Massie has raised funds to help get the track fixed.
A national fundraiser called “Run for the Eagles” was held at JL McCullough Junior High School in Texas in a town called The Woodlands while 5Ks were held in Brewton to raise funds.
Current W.S. Neal athletic director Doug Hoehn said the track repairs will be made.
“We will start work on the track here in the coming months,” Hoehn said. “I did not want to have the track torn up during football season.”
The final details of a company to complete the repairs is in the works and funds are in the account to help aid in those repairs.