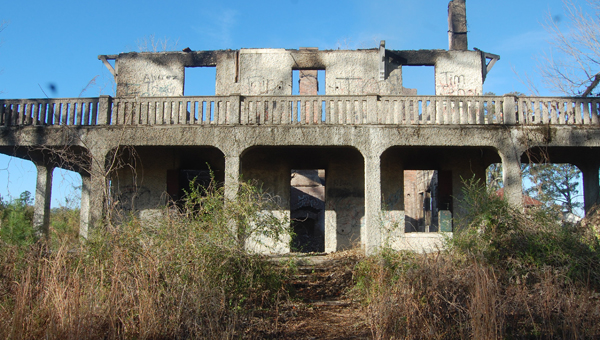 The house, which had been abandoned for several years, had collected a lore over the years, with everyone from historians to ghost hunters seeking information and stories about the old farmhouse.

Fire Chief Lawrence Weaver said a cause has not yet been determined, but there was no electricity at the house.

“There was not a lot we could do to keep it from burning,” said Weaver, who said firefighters arrived shortly after 3 a.m. “The inside of the house is completely gone. The outside walls are still standing, but they look as if they could fall. We’ve had some hot spots we had to attend to, and some of our men are keeping a check on it and have closed off the site.”

Built in 1911, the house and accompanying dairy farm were named Marinia. The home was built and occupied by the Blacksher family for many years. The current owner does not live in Brewton.