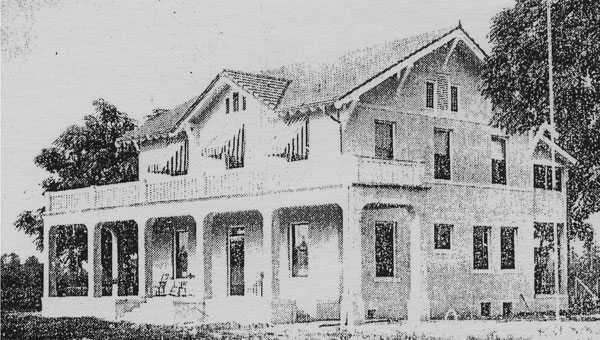 A 3 a.m. alarm Wednesday signaled the end of an era for those who grew up and lived in the Brewton area.
The century-old Blacksher House, once rumored to be the home of hauntings and other curious events, burned leaving only a shattered shell of the former mansion.
Although Brewton firefighters responded to the early morning blaze, saving the structure proved to be impossible.
“There was not a lot we could do to keep it from burning,” Fire Chief Lawrence Weaver said. “The inside of the house is completely gone. The outside walls are still standing, but they look as if they could fall.”
The home is owned by Dr. Robert Conner, one of a handful of family members who still have a connection to the home. The news surprised Conner and brought up wishes of things undone.
“I hate to hear about it,” Connor said. “I wish that someone would have bought it and fixed the old place up.”
The news of the fire spread through the community almost as quickly as the blaze had consumed the history-filled structure.
As early as mid-morning Wednesday, comments and memories about the home and the consuming fire that brought it down were plentiful on Facebook.
“I remember walking down that little dirt lane as a young girl with my friends while telling ghost stories and we would turn around and run before we actually got up to the house,” Tammy Ivey wrote. “Each time we would get a little bit closer before getting spooked. I remember making it to the steps and standing around playing and eventually we went inside. A couple girls went upstairs, but I didn’t. This was in the 70’s. Later, when I was a teenager, there were parties there a lot, but I only went inside once then also. The last time I went down there, I found my daughter and some of her friends walking down the lane towards the house. They had gotten themselves scared also and were glad to see me. We went on down to turn around and there was a party going on. That would have been late ’90s or early 2000s.”
Although the house had only sporadic residents over the past 20 years, one former resident enjoyed their time living in the home.
“My husband and I were the last ones to actually live there,” Lacie McCall said. “When we moved out we went back about a month later and found the place destroyed. I have some wonderful memories and would have loved to be able to live there again.”
The house, located just off Fleming Lane in Alco, sits just behind Alco Baptist Church.
Lynn Crutchfield, who attended the church as a child, said she remembered attended services at the home while construction of the church was completed.
“I loved the house,” Crutchfield said. “I can remember standing on the upstairs porch and looking down the lane. You could see the end of the lane from the roof. It would have been wonderful if someone could have kept it up. Most everyone in Brewton has at least one story to tell about the house. It truly was a house of mystery and caught the attention of anyone who ever saw it.”
Stories about the home continued through the week with many memories of activities and even families how occupied the home through the years. John David Finlay remembered one of the families that lived in the house.
“Mr. Manford Blacksher rode a bicycle all over the place after the family lost their money,” Finlay said. “He was apparently an inventor. He invented a toe exerciser that consisted of a ring that went on the toe and was attached to a string to exercise. I don’t think he made any money from that. His wife, Mary, was a school teacher at W.S. Neal for a number of years.”
Although an exact cause of the blaze has not been determined, Weaver said what remains of the structure is unsafe.
“There was no electricity connected to the house and the cause of the blaze is undetermined,” Weaver said. “We do have some ideas of what happened and the fire is under investigation. I would like for the public to know that the remains of the structure are very unstable and for everyone to stay out of the building and watch their steps. There are just too many things that could wrong.”
The house,  built in 1911, was inhabited for many years by the Blacksher family, who grew their fortune in the lumber industry. One of the family’s mills was situated on the parcel of land now occupied by Burnt Corn Creek Park. The mills had provided well for the family, and Erasus Manford Blacksher decided to build a house for his family. When the house was finished, it was given the name, Marinia. It was a beauty with Italian tiles, used in several places in the house, with the most of them being used in the floor of the porches which surrounded the front and sides of the house.
James Blacksher, an attorney in Birmingham, said previously he had only fond memories of the house at the end of Blacksher Lane.
“We would come to visit our grandmother and have the best times,” Blacksher said. “We used to pull our mattresses out on the upstairs porch and sleep there in the summer time. We also liked to watch the Navy planes as they flew over. They used the red roof on the house as a landmark.”
Weaver said the department will continue an investigation to determine the cause of the fire.