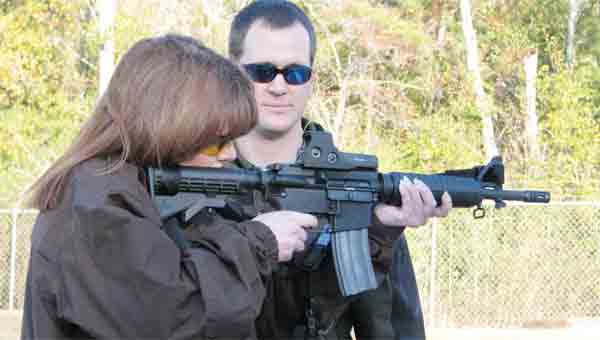 Eight women walked into Brewton City Hall Saturday morning fearful of handling guns. After a few hours of instruction on safety and procedure and a few more hours of hands-on training, those same women left with a new-found respect and confidence in the weapon.
The Brewton Police Department hosted a Women’s Firearms Safety Class Saturday — the first class of its kind for the department — lead by Sgt. Travis Minchew and Sgt. Andrew Casey as instructors.
“I think the class was a success,” Casey said. “We had fun and I think the students had fun, too.”
Casey said the class was held after Brewton Police Chief Monte McGougin suggested the idea.
“Chief came to us and said he wanted to put on a class for women on gun safety,” Casey said. “He left it up to Minchew and myself to get things together and pull it off.”
Casey is an NRA certified firearms instructor while Minchew holds a certification for firearms instruction from the F.B.I.
“This was a real learning experience for everyone,” Casey said. “We were able to determine what works best for a class like this and even got some ideas on class size from this first course.”
Students in the class were Rita Folmar, Susan Jennings, Karen Taylor, Michelle Minchew, Lisa Tindell, Angel Mitchell, Sue Barnes and Stephanie Paul.
Mitchell said the class gave her some confidence when it comes to handling guns.
“I don’t have to be afraid anymore,” Mitchell said. “Now I know how to handle a gun without being in fear.”
Barnes, one of the older students in the class, had never fired a gun before Saturday’s class.
“We have a handgun at home, but I’ve never fired it,” Barnes said. “Now, I think I can actually handle it without having a fear of it.”
Following classroom instruction on safety and the inner-workings of handguns and other firearms, students were escorted to the Brewton Police Firing Range for hands-on instruction.
“Everyone caught on to how to load and handle guns very well,” Casey said. “I’m please with how well everyone did in the class.”
Students were shown the proper way to load and unload weapons in addition to the proper stance and grip for the guns.
“Based on the feedback from the students following the class I think everyone had a good time and learned a lot about firearms safety and handling,” Casey said. “Because of that, we are already planning to have more classes.”
Casey said plans are already in the making for future classes offering different safety courses as well as other courses through the department.
“We hope to be able to get another class together for sometime in the spring,” Casey said. “We are working on maybe a novice class as well as some other classes. We want to offer classes in areas that are needed here. We are even hoping on having a marksmanship class sometime in the future.”
Casey said the class size of Saturday’s course was a good indication of what instructors can handle on the firing range.
“We have 30 officers in our department trained on handling a firearm,” Casey said. “But, we only have two certified instructors. When you have a class of students who have little or no experience in handling a firearm you need more one-on-one instruction. When Minchew and I are on the firing range as instructors with our officers, we have a little less stress in the teaching area. Class size will certainly be a factor in what we are able to offer in the future.”
Taylor said the class gave her confidence handling a firearm and taught her safety she can now put to good use.
“I’ve been anxious to learn how to shoot a handgun and this class was just what I was looking for,” Taylor said. “I’m looking forward to learning more about firearms and getting more confident with firing one.”
The class, originally designed to host 20 students, was part of the Brewton Police Department’s efforts to offer an opportunity for women to learn more about firearms and safety in handling, Casey said.
To learn more about future classes being planned by the Brewton Police Deaprtment, follow them on their Facebook page or the department Website at www.cityofbrewton.org/departments.