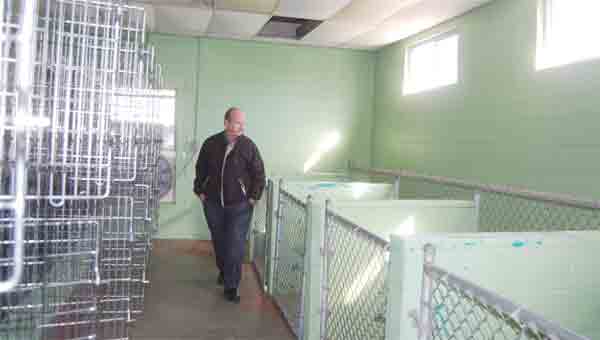 City Clerk John Angel surveys kennel spaces Tuesday as the City of Brewton takes over animal control for the community.

A Tuesday afternoon visit from a local locksmith allowed officials with the City of Brewton to enter the facility that will be home to the new animal control department for the community in the coming weeks.
The City of Brewton began efforts to handle animal control, sheltering and adoption Tuesday after staff members of the Humane Society of Escambia County vacated the building they had occupied for seven years.
City Clerk John Angel said plans are to inspect the building to see what will be needed to begin sheltering animals arriving at the facility on U.S. 31 South.
“We will have to take some time to see what is here and what we have to replace or equip for the building,” Angel said. “We will have to do some clean-up and get things ready to begin animal intake. We will certainly have to have new office equipment including computers, a reception desk and other things. The plan is to begin animal intake within two weeks. We hope that happens, but it could take a bit longer.”
Councilman Dennis Dunaway sat on a committee recommending the animal control duties within the city limits be handled by the City of Brewton.
The recommendation of the committee was approved by the Brewton City Council in November and was effective Tuesday.
“We have employees in place and are ready to get going,” Dunaway said Tuesday. “The workers will be getting materials together and drawing up some rules and regulations for the facility. Those regulations will be looked at by the committee and will have to be approved by the council. We want to make sure we are doing things the right way.”
Employees in place for Brewton’s animal control department include Robbie Crenshaw, Buford Varner, Christina Green and Connie Frazier.
Crenshaw is somewhat seasoned at the art of animal control and is anxious to get back into the environment.
“I was with the city’s animal control from October 2001 to October 2004,” Crenshaw said. “I’m ready to get back into it. I enjoyed it.”
Crenshaw will serve as the city’s animal control officer, with Varner as animal control technician. Green will be the shelter’s office manager, with Frazier serving as kennel techician at the facility.
The department will be under the direct leadership of Duane King, public works department director.
“We have a lot to do to get things ready here,” King said. “We’ve just got to get in and clean up and get things ready. It’s going to take a little time.”
Dunaway said all employees of the animal control department will be certified in the coming months.
“We have one employee certified in animal control already,” Dunaway said. “We will have everyone certified as soon as possible.”
Dunaway also said plans are being made to make the facility as fully-functional as possible from pet surrender to adoptions.
“We are already making contact with merchants to help with food items,” Dunaway said. “At some point we will be able to have volunteers come in and offer help as well. We also want to save as many animals as possible, but we know our limits. If an animal is picked up or brought in, we want to return it to the owner as quickly as possible. For those animals that don’t have a home, we want to offer adoptions here as well. We hope that we can have the shelter open on Saturday’s for adoptions.”
Since the City of Brewton has a leash law, Dunaway said there could be fines and fees associated with animals picked up and housed at the shelter.
“We will be catching stray animals and brining them into the shelter, but that’s not where it ends,” Dunaway said. “We will also be looking to find out who owns those animals. We will be running the shelter and the department on tax dollars. We have to run it that way and do things right.”

Despite injury, Cooper has no regrets about Auburn