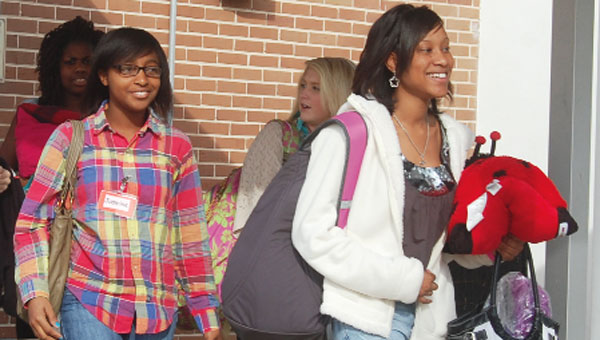 By Adam Robinson
and Lisa Tindell

Buses filled with smiling members of the T.R. Miller High School band pulled away from the campus Friday afternoon enroute to New Orleans — to participate in performances during Monday’s BCS Championship game.
Mary Bell, TRM principal, praised students for their hard work in securing the opportunity before them.
“I’m really proud of you all,” Bell said. “You have worked hard to make this trip happen. This is a once-in-a-lifetime opportunity. As you go to New Orleans and represent T.R. Miller, I want you to wear your colors proudly.”
Although the TRM band, supporters and parents are making the trek to support the Brewton students, other Brewton residents will be making the trip for other reasons.
Don Ward and his wife will be in attendance at the game as a show of support for their daughter, who is a member of the Million Dollar Band of University of Alabama.
“My wife and I wanted to attend the game because our daughter, Ashleigh Ward, is a Crimsonette and will be performing at the game as part of the Million Dollar Band’s pregame and halftime show,” Ward said. “We are also longtime Alabama fans so this is really exciting and fun for both of us.”
Ward said his family plans to attend the pep rally in New Orleans Sunday afternoon and enjoy the sights and sounds of the city.
“We will be able to meet our daughter and take her out to eat Sunday night to celebrate my birthday,” Ward said. “We don’t really tailgate. We just plan to spend some time with Ashleigh, and see New Orleans again after many years.”
Another Brewton family is planning to take in the activities surrounding Monday’s rematch between Alabama and LSU.
Beth Holland, along with members of her family, will be attending the game — mostly because of luck and good planning.
Holland said she was able to get tickets to the game this year the same way she got tickets when Alabama went to the National Championship game in 2009 against Texas in the Rose Bowl.
“I actually put a bid on Alabama, through the Sugar Bowl website,” Holland said. “We got tickets that way when we played in the Rose bowl. We are leaving on Saturday. The hotels had three-night minimums so we will just go do some sight seeing.”
As far as tailgating, Holland said they don’t have any set plans.
“Game day tents are hosting a huge tailgate so that may be an option,” she said. “I am looking forward to the game. I personally think it will be a better game this time. I look for more scoring. As far as predictions, I haven’t really paid a lot of attention to what they’re saying. The teams are so evenly matched. They have an advantage with special teams but I feel we (Alabama) have an advantage in coaching.”
Ward attended nine Alabama games this year and said there was only one disappointment—the LSU game in Tuscaloosa on Nov. 5, which was a 9-6 loss for the Tide in overtime.
“We are really looking forward to the rematch Monday between the two best teams in the country,” Ward said.
While that was the only loss for the Tide this season, many thought that one loss had knocked the Crimson Tide out of any chance to win the National Championship, but not Ward.
“I did think they had a chance of going since it was such a close score and it went into overtime, but Alabama had to have help to actually get to the BCS,” Ward said.
“We really hope Bama wins this time, but regardless of who wins, we feel fortunate to be able to go there and watch our daughter perform in the Superdome at a National Championship game. The only way we could be happier is if we beat LSU.”
Like Ward, Holland said she was pleased with Alabama’s season minus one game.
“I was pleased with the season, with the exception of LSU, of course,” she said. “When we lost that game, I figured our shot at the title was gone. I was very anxious the night they announced the final BCS standing. It is incredible that the state of Alabama is playing for the title three years straight.”
Holland said her son Travis, along with his friends Edward Taylor and Tanner Shehan will join them at the game.
The game will be televised on ESPN at 7:30 p.m. Monday.