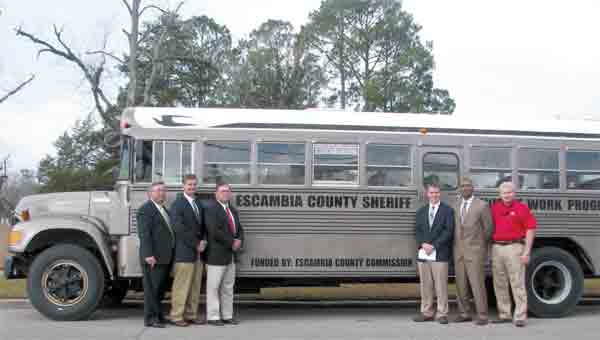 A fresh coat of paint and a few well placed decals have turned a school bus into a mode of transportation for county inmates.
Escambia County Sheriff Grover Smith made arrangements, with the help of the county commission, to purchase the vehicle for the department.
“Having this bus available will allow us to put more men out to clean along the county roadways,” Smith said. “We can transport about 30 people on the bus increasing the amount of work we can get done.”
Smith initiated the road crews last year by getting approval to put certain county inmates to work picking up trash and debris along the roadsides throughout the county.
“The inmates selected for the crew have to be willing to work and there is plenty of work to do,” Smith said. “We have gotten approval from the judges to increase the number of men allowed to be a part of the crew.”
Previously only about 10 inmates were used for the program, but with the recent approval, Smith’s dream of increasing work for the county has become a reality.
In June, Smith said he had a dream to have “more than 10 on the work crew,” and that dream came true with the acquisition of the bus.
The vehicle was made unique through the work of department employees including painting and decaling.
“We did the work ourselves,” Smith said. “The lettering on the side was done for us by Jus Do and we took care of everything else.”
Smith said some additional renovations to the vehicle are planned to provide additional safety and security.
“I want to get cages at the front and back of the bus to allow for more security so that we can handle more workers,” Smith said. “That really shouldn’t be a problem. I’d even like to see the bus used for other purposes around the county — have it in parades and let students have a ride now and then.”
Smith said more county inmates are falling into a particular category making them prime candidates for the current road crew program.
“We have people now who have recommitted and because of that have high bonds,” Smith said. “Those are the people who need to be out picking up trash.”
The Escambia County Commissioners were invited to take a first look at the bus on Monday by Smith.
“This would not have been possible without this Commission,” Smith said. “I appreciate their support and approval for things we need at the department.”
Inmates allowed to be a part of the program have rules to follow and have a lot to gain by cooperating in the program, Smith said.
Inmates who are approved for and join the program are allowed to plead and get credit for time served. Those who step out of line will automatically be taken out of the program and returned to population.
Smith previously said those who cause problems will be ejected from the program immediately.
“If they get rejected they will go back into the system,” Smith said. “If they have a bad attitude, they’re out. They will have to follow the rules and they will never be out of sight of an armed correctional officer.”
Smith said the program is “the right thing to do.”
“It is a win-win for all of us,” he said. “My No. 1 concern is public safety. We’re not putting anyone on (the crew) that we’re concerned about.”
Since the program begin, inmates have picked up trash and debris throughout the county with several tons of trash cleaned from roadsides from Brewton to Atmore.