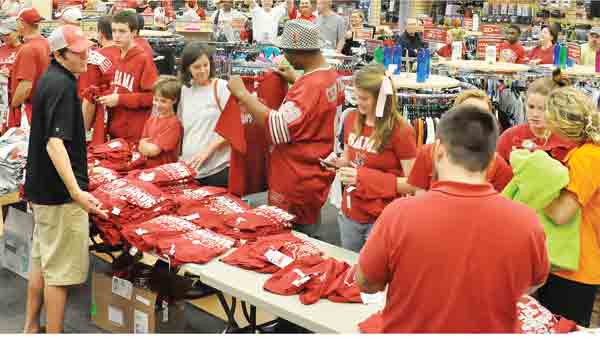 Some were in their pajamas. Others were in regular clothes. But either way, it was Alabama clothing they were wearing and waiting to get more of — only this time it was BCS National Championship attire.
That was the case Monday night at Hibbett’s Sports in Brewton as fans lined up outside before the game ended to be the first to get championship gear after the Tide’s 21-0 win over LSU Monday night in New Orleans.
“This is a pretty good crowd,” Hibbett’s manager Amber Findley said as she worked the cash register Monday night, with the store’s phone ringing off the hook. “People have been here since the third quarter when I first got here.”
Two of the first people in line were Charlie and Debbie Yoder.
“We were the second ones in line,” Debbie said. “I think the game tonight was great. We left with four minutes left in the game. We love Alabama. Roll Tide.”
That Roll Tide chant would not be the last one of the night as it was heard several times in the store line — a line that weaved its way out the door and down the sidewalk towards Murphy’s gas station near Walmart. The line prior to doors opening just before 11 p.m. stretched down toward Dollar Tree and Cato’s.
Cody Vickery, a worker at Hibbett’s for almost two years, said the crowd Monday night was one of the biggest he has seen at the store.
“It was a great defensive game,” Vickery said. “I think Alabama executed a lot better than they did the last game. I think in the last game that LSU won, I don’t think LSU beat Alabama, and I think Alabama beat themselves. Alabama executed very well Monday night. As a worker, it is the most packed I have ever seen. Last year we had the Auburn game and Auburn won the championship and it was not this many people. Right now, it is out the door and we have only been open for 25 minutes.”
Alabama fan David Martin was in line along with his daughter Rebekah, who is an Auburn fan. Rebekah said she drove home from Shreveport to watch the game.
“I’m here to get some stickers and shirts,” David said. “It was great to finally get a touchdown.”
“I am just glad it stayed in Alabama for another year,” Rebekah said.
Debra Mullis joined Alabama fans waiting to get championship gear Monday.
“It was just an awesome game,” she said. “I am just glad we got a shutout.”
Young Alabama fan Hayden Atkinson stood in line with his mom and young brother.
“Alabama had a good comeback tonight,” he said. “They came out pumped up. All I have to say is that it was just a great game and LSU just quit at the end. I am here tonight because I want a shirt because I am a big Alabama fan.”
T.R. Miller volleyball and softball coach Greg White was also in line  waiting his chance to get some championship attire.
“It was just total domination,” White said. “I thought Alabama had a small chance to get back into the national championship and the cards fell right and things worked out.”
White said other fans across the nation would be mad of Alabama’s win and the six straight championship for the SEC.
“I am sure the rest of the country hates us right now,” he said.
Assistant T.R. Miller football coach Marc Edge was just ahead of White in line Monday night.
“I am here to commemorate a hard-earned national championship,” Edge, who helps coach defense on the T.R. Miller football said. “It was just incredible defense and complete domination to hold LSU to under 100 yards. Who would have thought a few missed field goals here and there in the first game would help us be the best football now. The SEC is just a conference that starts with defense.”
The win for Alabama was the school’s 14th national championship and the sixth straight for the SEC along with three straight for the state of Alabama after Auburn’s win last year and Alabama’s win in 2009. The win was also Nick Saban’s third BCS national championship win as the Tide dominated LSU. The stingy Tide defense held LSU to 92 total yards in the win Monday night.
With the Alabama win Monday night, it was the third straight year a team from Alabama has won the national championship.
Findley said the championships have helped business.
“It has helped a great deal,” Findley said. “We sell a lot the night of the championship and that week and it helps.”