TRM duo competes in half marathon 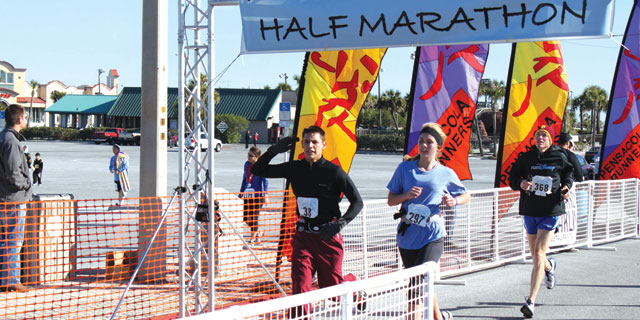 Two T.R. Miller Tiger cross country and track athletes competed in the Pensacola Beach Run half marathon Saturday and placed first in their age divisions.
Amber Terry and Christian Carlson ran in the even Saturday with Terry placing 236th and Carlson placing 237th both times of 2:19.04.
“For me personally it was just the accomplishment and the self pride I could take in having completed it,” Carlson said of his motive for wanting to do the race. “I mean, thirteen miles is a long ways to go, so I’m glad to have done it.”
Terry said she had someone inspire her to do the race—her mom.
“The run Saturday was a type of fun run and we ran in Pensacola, on a road beside the beach,” she said. “My mom gave me the inspiration. This was something that not many people can say they have done but now me and Christian, at the age of 15, can say we have.”
The duo trained together a little over a month, about five or six weeks, for the race doing long runs and other exercises and training regiments for the race.
“We trained for about six long weeks, which we started with six miles and finally worked our way up to 13 by the end of week six,” Terry said. “We definitely ran together. This was meant to be something we enjoyed and running with a friend makes every mile seem a lot shorter.”
Carlson said finishing first in their age divisions was is fine by him and the time was better than when they ran a mock race in training which also made him happy.
“My goal was to help Amber finish and to finish myself so first is, well, much better than I hoped for,” Carlson said.
“We finished together just like we started,” Terry said. “The way we finished overall was pretty good especially since we weren’t really expecting to win anything. The time we got at our race was very good. It beat all of our practice times so I thought it was a job well done. My goal was to finish the half marathon within three hours and we surpassed it.”
While they placed first, finished together, and ran the race in better than expected times, Carlson and Terry said they took a lot from the race and learned some things with the main thing being about the mind.
“I learned that the body is way tougher than we think and the only thing holding us all back from stuff like this is our mind,” Carlson said. “If we could just run like we knew we could finish, it would be a whole new world of competition in running.”
“From this race I have learned that when you put your mind to something you can do it,” Terry said. “This race helped me learn that I’m way stronger than I ever thought I would be. I think this will help me in cross country by giving me the endurance I need to reach my goal and win state next year.”
While Terry said she thinks the race will help her in her endurance to win state in cross country next year, Carlson said it will also help him in his training for cross country next season as well.
“This gives us a lot of base miles to work off of,” he said. “I won’t be running track this spring, but it is definitely a good spring board to work from working towards cross country.”
With the Pensacola race behind them both, Carlson and Terry both plan to run in future races. Carlson plans to run in the Azalea Trail Run 10K in Mobile March 24.
“I actually think I might keep doing these races,” Terry said. “It is a great confidence boost. Last year we did do the 10K at the same race but that was nothing compared to the half marathon we did this year.”
Both Terry and Carlson offered thanks to Alecia Glaize and their coach Matthew Dobson.
“I’d just like to thank Mrs. Glaize for giving me tips and the needed equipment to run this race effectively,” Carlson said. “I’d also like to thank coach Dobson for his support and help throughout the race, and for coming up with our training schedule.”
“I am grateful for all the support from our friend coach Dobson who actually ran with us at the race,” Terry said. “And Mrs. Glaize who gave us great advice as we began to train. I can’t forget about our parents who were behind us the whole time.”
As for any advice to other runners wanting to run in half marathons?
“Good luck,” Carlson said. “I would suggest running one long run a week, with two short runs in the same week. The long runs should be increasing in distance every week. We started at six and went up by twos until we hit twelve, then we ran a mock race, or running 13.1 miles.”
Terry said her advice would be to not give up.
“It is easier the last six miles,” she said.