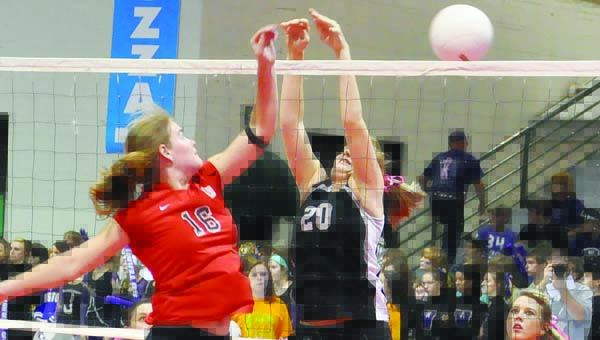 In its winter board meeting Wednesday, the Alabama High School Athletic Association’s Central Board of Control’s plan to institute Super Regional tournaments at two sites in the state volleyball playoffs were approved for the 2012-13 school year.
The post-season playoff format will include three rounds beginning next season with area tournaments to be played any time Oct. 18-20 and Super Regional tournaments with 96 teams in six classifications at the north site and 96 teams in six classifications at the south site being played Oct. 26-27.
The Elite Eight state tournament will be held Oct. 31-Nov. 1.
The North Super Regional will be held at Huntsville’s Von Braun Center while Montgomery’s new multi-purpose complex at Cramton Bowl was approved to host the South Super Regional, contingent on a site visit scheduled later this week.
According to a press release from the AHSA, the new format streamlines the volleyball playoffs by combining two regional tournaments into one and eliminating the sub-state round, thus reducing travel costs. The 2012 format will advance the winner and runner-up from each area tournament to a Super Regional. The top four finishers in each Super Regional will then advance to the Elite Eight state tournament in each classification.
“We think this will elevate the championship program to a new level for volleyball and provide a memorable and positive experience for our student-athletes and schools,” AHSAA Executive Director Steve Savarese said.
On a more local level, W.S. Neal volleyball head coach Jeff Haney said he did not think travel cost in the playoffs was bad.
“Some teams have longer trips than others but it is not near as bad as traveling to a home facility,” he said. “It is a lot worse for softball. I am all for saving money though.”
Haney did say the super regionals would be big for the kids playing.
“Going to a big arena like that will be something big for the kids playing,” he said. “Some of them have never played in a big arena. Having 96 teams at one site…that is a lot.”
The Elite 8 tournament is played at the Pelham Civic Center each year. The final eight teams from each classification play for the state championship there over two days.
T.R. Miller’s Lady Tiger volleyball advanced to that tournament for the first time in school history during the 2010 season.
Lady Tiger head coach Greg White said he thinks its going to be a good thing.
“It sounds similar to how the softball regionals are set up and I think that’s a good set up,” White said. “We had the opportunity to advance to the Elite 8 Championship in Pelham two seasons ago and that was a great experience. This looks to provide a big stage for the athletes to play on and it will provide a ‘big game’ atmosphere that the athletes will remember.”
In the current volleyball playoff format all teams in the 16 areas in each of the six classifications play in an area tournament with the area tournament winner and runner-up advancing to regional play in one of four regional tournaments across the state (32 teams from six classifications totaling 192 total teams). From there, the top four teams from each regional site advance to sub state (16 teams) with the eight match winners at sub state advancing to the Elite 8 in Pelham. Eight teams from each of the six classifications play in single elimination format with the quarterfinals and semi-finals being played on the first followed by the six state championship games on the final day of the tournament.
Both T.R. Miller and W.S. Neal will be competing in the same area next year along with Bayside Academy and Cottage Hill.
Bayside Academy has won 10 straight state volleyball titles. The Admirals have won 20 volleyball state championships – most in AHSAA history, surpassing the 19 won by McGill-Toolen.
Cottage Hill won the state championship in 2010 in class 2A.