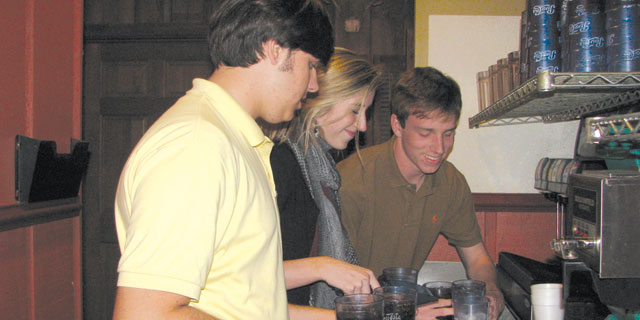 Spaghetti may not be the cure for cancer, but it can help.
A group of T.R. Miller High Schools students used spaghetti as a way to raise funds for the American Cancer Society Monday night — an idea that will put more than $900 to work funding research and providing care for cancer victims.
Debra Mullis, who serves as team captain for the TRM Relay for Life team, said the students have worked hard to set a standard in raising funds for the Relay event.
With one fundraiser already under their belt, the Relay team was able to raise $951 from Monday night’s event held at David’s Catfish House.
“Josh Godwin, the owner of David’s was just great,” Mullis said. “He opened up the restaurant for our kids to use for the supper and then stayed to help them, along with some of his employees.”
With students taking orders and dishing up the Italian speciality, Mullis said the team used the event as a competition among themselves as well.
“They also had a competition among themselves to see who could sell the most spaghetti plates,” Mullis said. “Austin Graddy was the winner selling the most plates during the evening.
Although the group raised nearly $1,000, not all of the money came from the sale of the dinners.
“We had some wonderful folks to give some tips on top of the cost for the dinner,” Mullis said. “I don’t know how many plates we sold and how much of the money we raised was given in tips. But, we’re thankful for every penny.”
Mullis said each member of the TRM Relay team kept a steady pace throughout the evening in their respective jobs for the night.
“The students were the waiters and workers and they worked really hard,” Mullis said. “ We had a great response and want to thank everyone for their support.”
In a previous fundraiser, the team raised just over $300 for the Relay for Life event, Mullis said.
“The school classes challenged each other to see who could raise the most money selling ‘purple feet’ to students,” Mullis said. “They raised $304 and that was just from fellow students. The senior class was the winner of that competition.”
Mullis said the students are continuing to come up with ideas to make fundraising fun and to continue to raise the total for cancer research.
“The team is already working on plans for our next fundraiser event,” Mullis said. “We are going to be putting on the Miss Relay contest again this year. That will be held March 1.”
T.R. Miller High School’s Relay for Life team will also take donations of any size to add to their total raised for Relay. To make a donation to the team, contact Mullis at the school office on Douglas Avenue or any member of the Relay team.