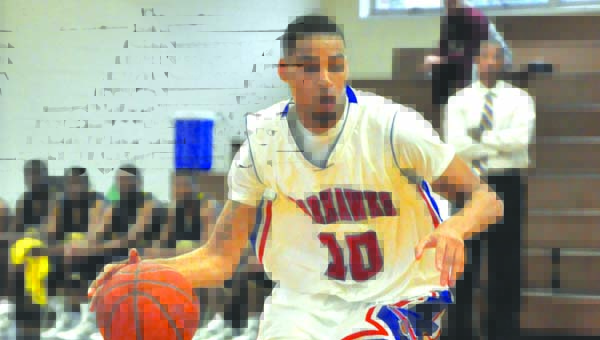 Jefferson Davis Community College Warhawk basketball player Turmonte Ragland has broken a school record at the school for most steals.
Ragland broke the school record for steals Jan. 23 against Enterprise when he recorded his 112th. Ragland currently has 124 steals.
Ellis Powell, a member of the JDCC Warhawk basketball team from 1998-2000, previously held the record of 108.
“I would say that Turmonte has been a major part of the core group that has turned our program around,” JDCC head coach Allen Gainer said of Ragland. “His work ethic and competitive spirit pushes everyone to get better every practice that we have. In addition, he is a better person than he is a player. I couldn’t be more proud of who he is on and off the court.”
Ragland, 19, is a sophomore at JDCC and attended high school at Stanhope Elmore in Millbrook where he graduated in 2010.
Since coming to JDCC, he has helped lead the Warhawks to a 14-13 overall record last season and a 10-6 record in conference play. JDCC advanced to the second round of the conference tournament last year as well.
This season, JDCC is currently 10-6 overall and is 4-1 in conference play.
The 6-1, 170 pound player had 61 steals last season and has 51 this season. He scored 217 total points last year and already has 244 this season.
Ragland said he came to JDCC because his high school coach told him that it would be a great start for him.
“He said if I came here, I could help turn the program around,” Ragland said. “That is with the help of my team of course.”
Ragland has been playing basketball since he was 10, although he started out a football player.
“Basketball makes me feel like I have a purpose in life,” Ragland said. “This is were I belong.”
Currently majoring in physical therapy, Ragland hopes to attend a four-year school and continue playing basketball. But while it is his name that is now in the record books, Ragland said it is the help of his team he was able to get the record.
“Last year I think I gave the team all I had and I’m doing the same this year,” he said. “I just been having more success this year. But it is really all the players around me that make me who I am. Without Larel Jackson and Brandon Scott pressuring the ball, I wouldn’t be able to have got those steals. Without Gabe Rice and D.J. Jackson blocking those shots, I wouldn’t have those steals. I owe it all to them. My attack is to attack with my team, use them to pressure the ball, and help on defense. It comes from everything we do at practice with our shell drills and other things. It just feels really good to set the record and put my name on something here.”
What does Ragland expect for the remainder of the season?
“My expectation is a championship,” Ragland said. “If we are fortunate to make it there, it is no denying us from it.”