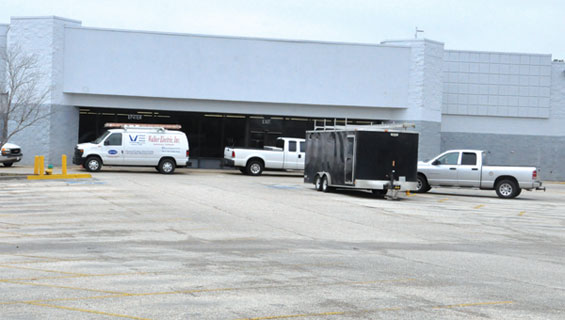 Work to revamp the old Walmart location is underway in anticipation of the new tennant, Farmer's Furniture.

Brewton’s retail community is growing with hopes of further growth in the coming months.
Community Development Supervisor Steve Yuhasz said one new business is already making arrangements to become a part of Brewton’s landscape.
“Farmer’s Furniture is preparing to open in Brewton,” Yuhasz said. “They will be occupying a portion of the old Walmart building.”
Yuhasz said the franchise-style furniture store was attracted to the Brewton area based on the availability of a suitable location and the opportunities they saw in the marketplace.
“The location is being prepared for the business,” Yuhasz said. “A partition is being constructed down the middle of the building for their use. They will occupy the space nearest the main entrance of the old Walmart. That will give them roughly 45,000 square feet of space.”
Although a specific opening date has not been given, the store should be open by late spring. Correspondence from Farmer’s Furniture representatives indicate a May opening.
“Farmer’s Furniture will cater to a wide range of customers,” Yuhasz said. “They will carry merchandise from low-end to high-end furniture.”
The Georgia-based furniture company began as a hometown store in Soperton, Ga., founded by Sherwin Glass in 1949. The franchise has grown across the Southeast to include 172 current locations — with each location tailored to the community it serves.
Tractor Supply Company, a Nashville-based business, is also making plans to be a part of the Brewton retail industry.
Lou Wren, a representative with TSC, said the contract to approve a lease arrangement for the company has not been completed, but work is moving forward.
“We have approved a contract for lease space in the former WinnDixie location there,” Wren said Tuesday. “But that contact work is not 100 percent complete yet. If the current plan continues to move as expected, we could be opening our store there by June.”
Tractor Supply Company began in 1938 when founder, Charles E. Schmidt Sr. of Chicago, Ill., established a mail order tractor parts business. By 1939, it had grown into a successful retail store in Minot, N.D.
The company boasts operation of 1,085 stores in 44 states as the largest retailer of ram and ranch supplies as well as a variety of other consumer products.
Other retailers and companies have also showed significant interest in the Brewton area. Although Yuhasz did not comment on those possibilities, he said his office regularly works to attract new business and industry to Brewton.