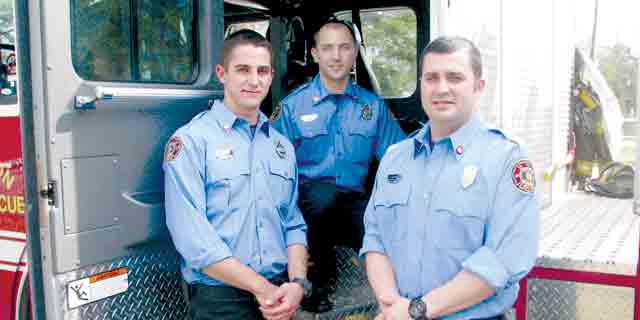 Pride at the Brewton Fire Department runs deep and the pride continues to grow as firefighters improve their skills.

Brewton Fire Chief Lawrence Weaver said the class completed by crewmembers they say is “the most grueling training they have ever taken,” has given him cause to boast.

“There were 32 who started the training and by the end of the week, there were only 24 left,” Weaver said. “With the training they received, they are much more able to save one their own in a fire and I am very proud of them.”

“It is the hardest class you can take as a firefighter,” Barlow said. “It is the hardest both physically and mentally. There are only 90 in Alabama who have graduated from the class, and three of them are from Brewton.”

The three firefighters said they volunteered for this special training.

“This training centers on a lot of retrieval of our own,” Barlow said. “We were trained, not only how to save someone caught in a fire, but how to go into a building when it was necessary to save one of own.”

The fire college has a five-story drill tower and a two-story block building. Trainees are drilled on how to make rapid escapes in order to know when its time to leave the structure.

“Everything in the structure is heated to a high temperature and it stays that way for a while,” Wilson said. “There is no free-lancing when we are in a burning building. Each one always knows where and what the other is doing. We spent five days at the college and put in around 60 hours learning the procedures.”

Josh Pate said the training they have received could be the difference in life and death.

“We have the training to save people to where they have a second chance at life,” Pate said. “We are firefighters because it is something we love to do. I look on it as a calling to this profession. Our training could make the difference in life or death of one of our fellow firefighters.”

Wilson said the training gave each of the firefighters more confidence in their jobs.

“With a class like this it will make us all better firemen,” Wilson said.

“We have built our confidence tremendously,” Barlow said. “We are in better shape both mentally and physically. Wearing full gear and air pack all week conditioned us for the work we do.

“This is not a job for us,” Barlow added. “This is a way of life. We are firefighters when we are on duty and off duty as well. We hope that is the way the city looks at us.”

Wilson agreed and said he believed the reason he became a firefighter was the experience his parents had prior to the beginning of his career.

“A few years ago my parents’ house burned and I saw how much stress they went through,” Wilson said. “I wanted to be able to help take that stress off someone else.”

The three men all said they practiced for months getting ready for the class. It was very grueling on them and at the end of the day, all they wanted to do was to get some rest, Barlow said.

“It was the hardest thing I have ever done, but we had fun too,” Barlow said. “I would encourage all firefighters to go this class. We see it as a challenge to be the best we can be and provide the best for the city.”