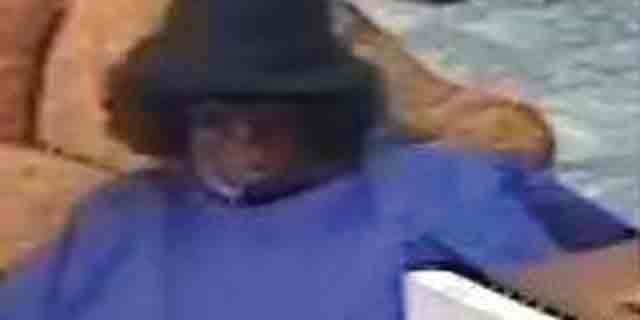 Brewton Police and FBI officials are in search of the suspect shown in this photo believed to be the person responsible for robbing the downtown location of The Bank of Brewton Friday afternoon. Anyone with information concerning the incident should call Brewton Police at 867-3212.

Investigators with Brewton Police and FBI are still looking for suspects and leads following the Friday robbery at a downtown Brewton bank. Although some leads are being followed, investigators have not given any other information on how the investigation is moving forward.

The current case involves an incident involving a heavily disguised suspect who was able to abscond with an undisclosed amount of cash Friday afternoon after entering the downtown location of The Bank of Brewton and demanding a teller fill a bag with the money.
Lt. Brock Holt with the Brewton Police Department, said the robbery suspect was able to take an undisclosed amount of money in the incident. .
“A suspect wearing a blue poncho, hat, gloves and sunglasses, entered the bank from the back entrance between the bank and the Ritz,” Holt said. “Upon entering the bank the suspect approached a teller and began to inquire about getting a safety deposit box. The teller then entered the bank vault with the suspect and began to show the suspect the different  sizes of safety deposit boxes that were available.”
Holt said the teller related that the suspect pulled a black bag hidden by the poncho used to hold the cash taken in the incident.
“The teller was told to fill the bag with money or be killed,” Holt said. “She began to fill the bag with an undisclosed amount of money and then the suspect exited the building from the same door that they entered.”
It is unknown if a weapon involved or if the suspect just threatened the teller with the use of one, Holt said. “The suspect then left the building and fled the scene in an unknown direction,” Holt said. “It is unclear as to whether there were any other persons involved who may have aided in the escape.”
Boardwalk business owner Clay Lisenby said he had gone to the parking lot with a customer to help her with some frames.
“Mr. Ward came out the back door of the bank and asked if we had seen anyone running away,” Lisenby said. “I told him that I hadn’t seen anybody suspicious in the area.”
Tracking dogs were called from Century Corrections Facility and a search was made of the immediate area, Holt said. Due to the nature of the crime the Federal Bureau of Investigation (FBI) was also called and were on the scene quickly after the incident.
“The FBI has been very helpful.” Holt said. “They have resources that we don’t have. Currently the Brewton Police Department along the the FBI are investigating the robbery. We have had a few leads in the case that are currently being followed up.”
Anyone with information on the incident or anyone who may have been involved with the crime, should contact the Brewton Police Department at 867-3212.