TRM seniors to present ‘wiz’ of a show 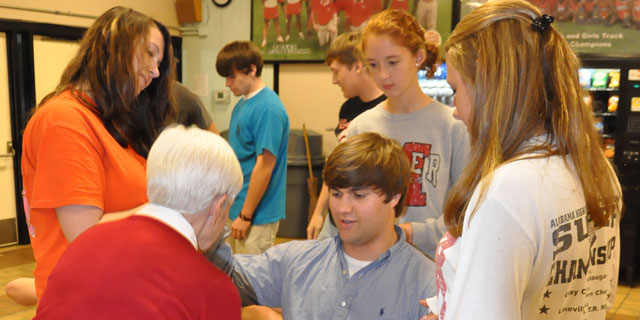 Senior cast member Curtis Glaize gets direction from Hermine Downing as other cast members look on during a recent rehearsal for the school's annual play. The show will be presented at 6:30 p.m. Thursday and 7 p.m. Friday. Tickets are $5 each.

A roof issue at T.R. Miller High School’s auditoirum brought about a decision to forego this year’s senior class play — but students and parents devised a way to ensure the class of 2012 would have their time in the spotlight.
Students and officials with the planned production say school personnel said the leaking roof would prevent the possibility of a production in the auditorium.
With hard work and heavy fundraising the class has raised the funds to secure a location for the presentation with Hermine Downing running the show as director.
“The students have raised the funds to use Woodfin-Patterson Auditorium for the production,” Downing said. “There is a leak in the school auditorium that needs repair and we didn’t want to possibly get wet in the middle of the play.”
Seniors and their parents approached Downing to see if she would be willing to help.
“I had some parents come to me and ask if I would be willing to direct a play for them,” Downing said. “I retired from this sort of thing a long time ago, but I just couldn’t turn them down.”
The class chose “The Wizard of Oz” to rehearse for presentation. Downing said the cast and crew have been working on the production since the students returned from their Christmas vacation.
The play will be presented Thursday, Feb. 23 at 6:30 p.m. and Friday, Feb. 24 at 7 p.m. at JDCC’s Woodfin-Patterson Auditorium on Alco Drive. The price of admission will be $5 per person.
“We have practiced three nights a week since the first of the year at the high school and will move to the stage at JDCC this week,” Downing said.
Downing said the students and their parents have really worked very hard getting everything ready.
“There are about 40 to 50 students involved in the play,” Downing said. “They and their parents have stepped up to help wherever they can. We have parents working on sets and costumes, and some of them will be working backstage during the play. We have begged, borrowed and made as much as we can, and I think it will play very well. I know the kids have had a lot of fun with it and they realize it’s the last time they will be involved with their classmates in something like this.”
According to Downing, many of the seniors are playing more than one role in the upcoming production.
Among the main characters are Dorothy, played by Jaime Snowden; Scarecrow, played by Patrick Weaver; Lion, played by Curtis Glaize; the Wizard of Oz played by Tyler Dehoff; and Tin Man played by Caleb McAnally.
Weaver, who has been in several local community productions, said he is very excited about the upcoming play.
“Not only am I excited, I am ready to get the job done and let the community know how hard we’ve worked,” Weaver said. “We have worked at this since the first of January, when we had the auditions. We had to sing and read for the parts and Miss Hermine Downing, who is the director, chose who would play each part.”
Even with Downing at the helm as director, another teacher is also pitching in to help with the production.
“Mrs. Myra Tatano, one of the teachers is our sponsor,” Weaver said. “Matt Pendergrass, who is a very talented pianist, will provide the music.“Mrs. Connie Parker is working on costumes and props and our parents have played a vital role in making this happen. Tradition is important at TRM and the senior play is part of that tradition.”
Weaver said his audition and participation in the production is a continuation of an art he has grown to love.
“I wanted to be a part of it because of my love of art and drama,” Weaver said. “It has been an outstanding and amazing experience.”
Jaime Snowden, who portrays the part of Dorothy, said she, too, was glad the seniors were able to do the play this year.
“We had been told earlier that it might not be possible to have it, but we were hoping we would be able to,” Snowden said. “They have been working on the auditorium and we weren’t going to be able to use it. Having a senior play is something we have looked forward to. Our parents have been chipping in, helping us with props and costumes for everyone  when it is time for the performances.”
Like Weaver, Snowden said the tradition of a senior class play is one she is happy to see happen this year.
“The senior class play is a tradition and we have worked really hard,” Snowden said. “Mrs. Tatano has been extremely helpful, not only as our sponsor, but in any way that she can. There is a lot of talent and dedication in this class and the play will be great.”
Along with principal parts in the production, a large portion of the senior class will add to the show in a variety of roles — including work behind the scenes.
Other cast members include Abbie Carlson, Alex Najor, Amber Nelson, Anna Greco, Ashley Daugherty, Ashley White, Austin Graddy, Caleb Dickey, Collin Graves, Collin Langford, Conner Denton, Dakota Stewart, Hunter Franklin, Jennings Fussell, Katie Baggett, Kayla Reiss, Lil Edwards, Logan Lowery, Louis Miller, Neill Morris, Nick Adams, Nicole Blackburn, Sara Allan, Will Adams, Miller Vickery, Leah Brundidge, Ramon Castro, Russell Weaver, Will Marriott, Malik Leach, and William Jones.