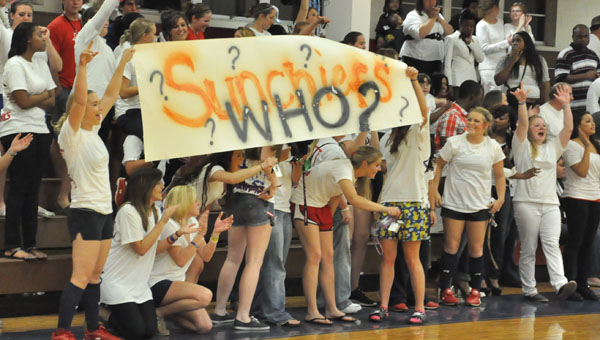 There is a sign in the basketball gym on the campus of Jefferson Davis Community College that reads “Begin with the end in mind: South Division Champs. Individuals play the game, but teams win championships.”
In a game Thursday at home against the Faulkner State Sun Chiefs, Warhawk head coach Allen Gainer deemed it the “biggest game in 25 years for Jefferson Davis Community College.”
With both teams tied for first place in the South Division of conference play, the game lived up to the billing as the Warhawks pulled out a 105-100 win over the Sun Chiefs in double overtime in front of a deafening “Whiteout” crowd of fans and supporters.
With the win, the Warhawks improved their record to 16-8 overall and to 10-3 in conference play with one game conference game left on the schedule and three overall left to be played.
“We made it exciting, but if the kids had not done what all they did with the whiteout and all the excitement, it would not have happened,” an exhausted but excited Gainer said after the thrilling win as students waited to give him congratulatories following the win. “It would have never had happened. Brittany McCastle and Kierra Perkins were the ones who initiated and we would not have been able to do it without that. R.J. played the game of his life and Greg made some huge plays and everyone made some huge plays. We just have to play Monday and finish the deal.”
Gainer said the win says a lot of his program.
“It says that these sophomores have such a tremendous work ethic and character that they have forever changed what our program’s expectations will be,” he said.
From 2004-2009, JDCC was 39-130 overall and 24-72 in conference play including just one win in 2008 and five in 2009.
In the past two seasons, JDCC is 30-21 overall and 20-9 in conference including a 14-13 overall record and 10-6 in conference while advancing to the second round of the regional tournament.
But after the thrilling double overtime win last night, the Warhawks knew they were in first place, but did not know if they were there alone or joined with another team.
“We are possibly tied with Alabama Southern depending on what they did,” Gainer said Thursday night. “If they won, we are tied with them, if they lost we are in first place.”
Then came the news on Friday, which made the win Thursday bigger than Gainer and the Warhawks knew at the time. Alabama Southern had lost to Chattahoochee Valley making JDCC the lone No. 1 team in conference with one game to go. (The No. 1 and 2 seeds get first round byes in the regional tournament).
In the game Thursday night, JDCC trailed Faulkner State 39-35 after the first half of play. In the first half, JDCC led 33-31 with 4:29 left before being outscored 8-2 the rest of the way to trail by four points at the half.
In the second half, JDCC outscored the Sun Chiefs 46-42 to tie the game at 81 and force overtime.
JDCC seemed to have put the game away in the second as they led 76-66 with 4:42 left to play, but Faulkner used a 9-0 run to cut the lead to 76-75 with 2:16 left and eventually would take an 81-78 lead with 15.2 left to play.
That is when R.J. Bowers connected for a 3-pointer with 7.1 seconds left to tie the game and force overtime.
In the first overtime period, Faulkner would jump out to a 90-85 led with 3:12 left, but JDCC would tie the game at 93 with 1:28 left and neither team would score the rest of the way and the game would go into a second overtime.
In the second extra period, JDCC would take 101-99 lead with 1:05 left to play. Faulkner would hit one-of-two free throws to cut the lead to 101-100 before D.J. Jackson would get a dunk to put JDCC up 103-100 with 13 seconds.
Up by three, JDCC fouled to put Faulkner on the line for two shots, but they would miss both and the Warhawks would get the rebound.
Turmonte Ragland would get two free throws with 2.4 seconds left to put the game out of reach and send the crazed fans in white into a chant as the final seconds ran off the clock and the court was stormed with JDCC winning by five, 105-100.
Ragland led JDCC with 24 points and was joined in double figures by five of the other six JDCC scorers.
Sherman Presswood and Bowers both had 18 points each and D.J. Jackson had 15. Larel Jackson had 12 points and Brandon Scott had 10. Greg Crum finished with eight points in the win.
The Warhawks were 25-for-34 from the free throw line including going 6-for-6 in both periods of overtime. Faulkner State was 20-for-33 and was 1-for-4 from the line in each overtime period.
With the win Thursday, JDCC’s winning streak improved to five games and will play at home against Wallace-Selma Monday at 7 p.m.
The Warhawks will go to Marion Military Wednesday at 7 p.m. and finish their regular season Friday, March 2 at Shelton at 5:30 p.m. 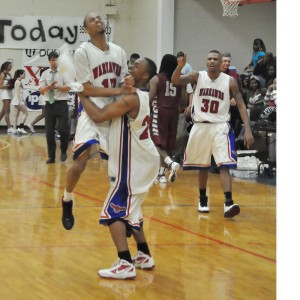 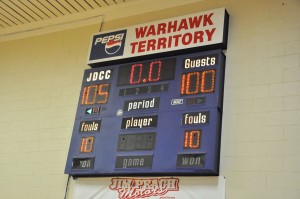 The final score says it all