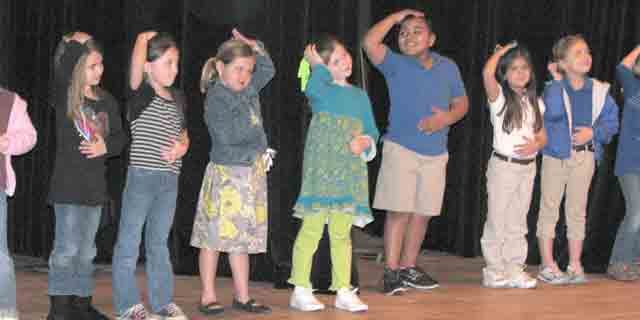 A group of young actors audition for parts in Saturday's presentation of "The Secret Garden'."

Nearly 90 students from kindergarten up stormed the stage Monday afternoon on the campus of Jefferson Davis Community College — all hoping to land a role in the upcoming Missoula Children’s Theatre production of “The Secret Garden.”

The production, a part of the Brewton Council of the Arts presentations, will be presented to the public Saturday evening beginning at 7 p.m. at the JDCC auditorium.

Madelyn Cave, publicity chairwoman for BCA, said the number of those auditioning for this year’s presentation is down from the 2011 production.

“We had 88 to audition for parts,” Cave said. “That’s fewer than last year, but still a very good number.”

Cave said several activities around the community may have kept some students from the audition call Monday afternoon.

“Both Brewton Middle School and W.S. Neal Middle School will be involved in Science Olympiad events this weekend,” Cave said. “That, I know, has kept a few students away. With a committment to be at rehearsals every day this week and all day on Saturday, it just wasn’t possible for them to be involved in both events.”

Cave said softball was also expected to keep some young girls from auditioning — but support from the YMCA staff took care of that issue.

“Softball evaluations were supposed to be held Monday with practice starting this week at the Y,” Cave said. “With the support of Darly Curry and Steven Dickey, we were able to get things worked out to allow those who wanted to audition to be here. I can’t say thank you enough for their support to help make that possible.”

Auditions continued Monday afternoon with a cast expected to be announced at the end of the audition phase.

For a full cast list and more photos from auditions, see the Wednesday edition of The Brewton Standard.